Newfoundland and Labrador is not the last stop on the food chain, and stock is being replenished, says executive chairman Capt. Syd Hynes of Oceanex, which brings a gamut of products in by vessel and truck. “We’re seeing absolutely nothing out of the ordinary . ... What’s happening is normal if there is such a word these days,” Hynes said Wednesday, March 18, acknowledging it is a nervous time for many people, but freight is running without issue during the COVID-19 crisis. There already was a drop in freight due to the economy, he says. He said everyone from stevedores, to ships crews and truckers are doing a great job. The items on the way include toilet paper. “All the toilet paper in Newfoundland and Labrador doesn't amount to much at the end of the day, but we did notice,” Hynes said of the mad dash by consumers to buy it this week. But he said national big box stores, half a dozen of which are clients of Oceanex, were concerned about replenishing items depleted during the buying splurge. “I was surprised how quickly we were contacted,” Hynes said of requests for additional shipments. “That was very rapidly rectified . ... They are really tuned into this. Newfoundland and Labrador is not being left out, from what I can see.” Among the array of products Oceanex brings in are perishables — bananas, lettuce and tomatoes as well as yogurt and other items. Oceanex has scheduled times to fill up at the distribution centre in Ontario — just like anyone else. Hynes said. About 400 trucks go through there each day. “Newfoundland and Labrador is not off or on a priority list. There is no priority list. … We are absolutely no different than anyone else,” he said. Meantime, Oceanex, like many other companies, has introduced its own COVID19 precaution protocols. That includes restricting employee travel, limiting face-to-face interaction with the public, customers and vendors, restricting crews from going ashore and other visitors onboard vessels, as well as stepping up sanitation and implementing a work-from-home policy for those employees who can do it. A recent hire form B.C. was asked to self-quarantine for 14 days. “We’re doing everything we can,” Hynes said. His advice to everyone: follow the health authorities' instructions and things will get back to normal eventually. “Take it seriously,” he said. TRUCKER CONCERNED Meanwhile, distribution of food is working fine, according to trucker Stan Reid, who picks up freight shipped via Marine Atlantic from Atlantic Canada and brings it east. “I don’t see any concern for the food chain in Newfoundland and Labrador,” he said. However, Reid is concerned about implications for truckers of the limited hours and other restrictions for restaurants that are either happening or on the way. He said truckers need places to stop and get a bite to eat and use a clean washroom, as there aren’t any public rest stops. Outside of a few dedicated private truck stops, many places don’t have the space to allow social distancing. So Reid hopes the government won’t forget about truckers when it comes to any new regulations or shutdowns, as they provide essential services. While drive-thrus are one thing, they don’t always provide healthy food, he said. “Not everyone has a fridge or a microwave in their truck,” Reid said. “Food places that are reasonable to eat at cost-wise are closing down.” FOOD ESSENTIAL At the daily COVID-19 media briefing Wednesday, Premier Dwight Ball said the food chain is intact in the province. He also noted major food distributers have given him assurances about the food supply. Ball also noted the “robust” sales in local stores, a nod to the panic buying of the past week or so. “Most cupboards in Newfoundland and Labrador are full,” he said. Ball said the subject of food imports — as most produce comes through the U.S. this time of year — came up during talks with the other premiers and Prime Minister Justin Trudeau about the U.S.-Canada border closures, and there were assurances that the food supply, among other essential items, such as health supplies, would continue. Grocery stores continued to have a run on supplies Wednesday, however, with certain items, like toilet paper, continuing to be snapped up. For instance, Dominion on Blackmarsh Road in St. John’s had not a single bag of French fries mid afternoon. The frozen vegetable coolers were empty, as were the chicken shelves. Soup, pasta sauce, milk and other items were being limited as to how many each customer could buy. The Dairy Farmers of Newfoundland and Labrador issued a statemnt saying the local dairy industry is taking increased bio-security measures to protect consumers and ensure a safe and reliable supply of fluid milk. Vice-chairman Crosbie Williams said there has been no negative effect on the production of local milk, and local farmers are producing enough fresh milk to supply the province. 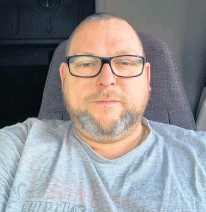 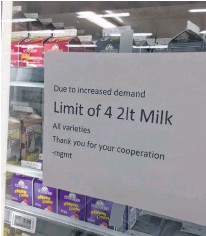