Aiming to close gap in care

GRAND FALLS-WINDSOR, N.L. — The supply of hand sanitizer in Grand Falls-Windsor is getting low and one pharmacy is hoping to fill the void until the supply is back in order. Central Pharmacy began making and selling bottles of its own hand sanitizer as fear around the spread of the COVID-19 virus hit the province. “We’re making antiseptic hand sanitizer which has a healthcare application,” said owner and pharmacist Ken Dicks. “That is the lens we look at it from and if we can help intercept the vector transmission by providing some hand sanitizer, some advice, we will.” This isn’t the first time Central Pharmacy has made its own sanitizer to offset public demand. During the H1N1 outbreak a decade ago, they did the same thing. Central Pharmacy has no interest in competing with the big brands. Instead, they’re hoping to fill a treatment void against the virus. “If Purell and some other brand is not available, then there is a gap in care,” said Dicks. “That is where we’ll jump in. We’ll backfill the gap in care ... and use our skills to do that.” On Wednesday, March 18, Minister of Health and Community Services, Dr. John Haggie, declared COVID-19 a public health emergency under the Public Health Protection and Promotion Act and introduced strict measures to prevent its potential spread. The World Health Organization previously declared the virus a pandemic. On Thursday, March 19, there was one confirmed case and two presumptive positive cases of COVID-19 in Newfoundland and Labrador. 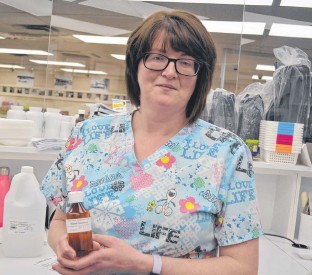