BISHOP'S FALLS, N.L. — The province has lost one of its oldest war veterans. Bishop's Falls' Lloyd Seaward, a Second World War veteran, died on March 16. He was 102. Seaward was known for his zest for life. He enjoyed hearing the stories of others and giving people a glimpse of his own life in return. A devoted husband and father, he willingly gave his time to his family and had a great interest in the lives of his children, grandchildren and great-grandchildren. Born in Clarenville in 1917, Seaward made his move to Bishop's Falls when he was hired by the Newfoundland Railway as a fireman on some of the first steam engines. Then, he was called to service in the military. Seaward was a member of the British Navy during the Second World War and was serving in Africa when the Japanese attacked Pearl Harbor on Dec. 7, 1941. While on the HMS Exeter in the Pacific Ocean, he and the rest of the crew jumped ship after she was sunk during an attack. For the next three years, Seaward was a Japanese prisoner of war. During that time he learned to speak Japanese and in 2018 he was honoured for his naval service at Exeter Cathedral, Exeter, England. After he served seven years in the navy, Seaward returned to Bishop’s Falls and his stationary engineer position. He eventually married his wife of 69 years, Margaret. Seaward would go on to engineer positions at the hospital and the paper mill in Grand Falls-Windsor. He would finish his working career as the superintendent of maintenance, responsible for the Grand Falls Trade School and the provincial building, as well as the Gordon Pinsent Arts and Culture Centre. He always held a love for the outdoors. When he could spare the time, Seaward could often be found walking, camping, snowshoeing or snowmobiling in the wilderness. For a time, Seaward and his wife travelled Canada and the United States in their trailer. He was also fascinated by the Beothuk people and the way they built their canoes and built some of his own in their style. Some of those canoes are on display at The Rooms in St. John’s, The Beothuk Interpretation Centre in Boyd’s Cove, and the Botwood Heritage Museum. Seaward's funeral was held March 19 at The Salvation Army Citadel in Bishop's Falls. It was limited to family and close friends because of COVID-19 virus precautions being taken. 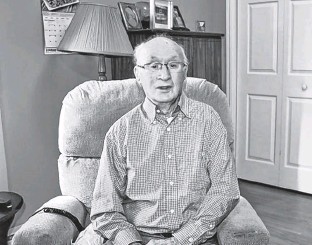