Eddie’s life is good thanks to blood donation 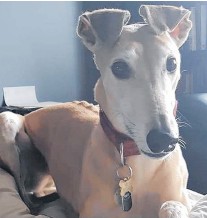 Eddie found himself rehomed after he retired from a lacklustre, but comical, career on the racetrack. He lacked the instinct or prey drive required to be a successful racer but, if the track had been smart and replaced the fake bunny with a Mcdonald’s cheeseburger, Eddie would have made them millions. His adoptive family firmly believes he may have been the worst racer ever to exist because this handsome boy is a couch potato, through and through. He obviously does not need beauty rest, but he does successfully fulfill his daily quota of sofa time. He lovingly gazes out the window wishing it was Saturday night, not because he wants to party, but because he loves his weekend pizzas. This boy does not have any proper foodie training or a three-star chef’s taste for food, but his favourite foods will surprise most everyone. He loves cooked potatoes, peanut butter, bananas, bread and we already mentioned his love affair with pizza. His parents, from time to time, will make him what they hilariously refer to as The Elvis Sandwich – it’s a peanut butter and banana sandwich. One sideways glance from Eddie, and you too will be handing over all your peanut butter and running to the store to buy him bananas. Besides peanut butter, Eddie loves potatoes and he will turn himself inside out for one when his family is having a big weekend breakfast with home fries. His father will hide one in his closed hand and Eddie must hit the correct hand before he can have the coveted potato. Afterwards, his dad has to act like a blackjack dealer in Las Vegas, waving his open hands to prove he doesn’t have another potato hidden. Eddie can be forgiven his lowbrow taste in food because he’s literally the bestbehaved dog ever. He’s sweet, affectionate and loves every person or dog he meets. He would affectionately and generously share his couch with every two-legged or fourlegged soul in the universe, just don’t ask him to share his slice of pizza, as we all have limits. Eddie’s family devoted quite a bit of time and research to find the perfect dog for their clan. His adoptive mom had experience with greyhounds so they reached out to a local responsible organization. The group they contacted had more than 30 years of experience in rehoming this majestic breed so they felt they would be in good hands or maybe even good paws. The family eagerly filled out an application and were accepted to attend a four-hour orientation presentation. There was not one dog at the presentation, just other potential adopters looking to provide a wonderful forever home for the same breed. It was a well-rounded, defined process to adopt from this organization, which heavily impressed the family. After the presentation, the association booked a home visit and they brought a greyhound along for the trip. Next, they secured a time to meet a dog that the group said matched all their doggy personality traits they requested. The family specifically asked for a velcro dog who was very chill, yet social with both people and other dogs. The group’s president recommended a dog named Ed Sheeran; yes, Eddie was named after a famous singer. The family of three fell in love with Eddie’s fawn colour, doe-like eyes and his wonderfully open and relaxed disposition. The family of three became a joyful family of four. Eddie loves his entire family but he has an extraordinary relationship with his teenage brother, Liam. Liam looks after all of Eddie’s needs and when he is not at school they spend their time together on their shared loveseat. Liam is a wonderful young man with a gentle and genuine animalloving soul. Eddie’s family was musically inclined long before Eddie entered their life, but that has changed. Quite by accident, Eddie’s family discovered that he loves to sing loudly and hits all the octaves, just like his namesake, Ed Sheeran. Eddie especially loves to sing along to The Beatles, Radio Head or, wait for it, Scottish bagpipes. Maybe Eddie is actually Ed Sheeran, wearing a dog suit. You never know. Most, if not all, pet parents will do anything humanly possible for their dog and Eddie’s have done precisely that, to the extreme. Eddie had a simple surgery at his veterinarian clinic one afternoon but it went terribly wrong. His parents had to race him to an emergency clinic for a frantic lifesaving blood transfusion. This blood transfusion involved two live dog donations, which came from two different rescue dogs, one being my dog. Dogs in the blood donation program are pre-screened and pre-approved for the medical procedure. A few days later the emergency clinic called me as Eddie’s family was on the phone. They dearly wanted to thank me because my best friend saved their best friend. In tears, I implored them to give the family my contact information. I got together with Eddie’s family and, to my surprise, they gave me an emotionally filled handwritten card, a bottle of wine and a gift card to buy something for my dog. They also did the exact same kind deed for the other donor dog. If that doesn’t melt your heart, nothing in this world ever will. Eddie has the absolute best family he could ever have wished for and he lets them know by belting out a tune from time to time and by stealing their hearts. Tracy Jessiman is a pet portrait artist who lives in Halifax with her husband and their three pets. She has been rescuing animals most of her life, but more intimately, animals rescued her.