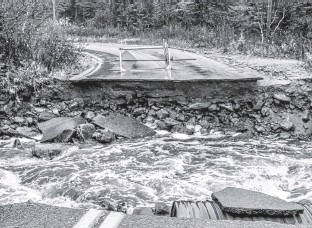 2022 has arrived but some weather occurrences from last year remain in our minds. One of the top weather stories in 2021 was the record-breaking rainfall that drenched eastern Nova Scotia and southwestern Newfoundland. Just as many of us were witnessing the effect of a devastating atmospheric river in British Columbia, one arrived in Atlantic Canada from Nov. 23 to 25. Parts of Cape Breton Island received 150 to 290 millimetres of rain with the highest amounts recorded in the Ingonish area where one weather station recorded 292 mm. Many roads in eastern Nova Scotia flooded or washed out, including several sections of Cape Breton’s iconic Cabot Trail between Ingonish and Neils Harbour. Southwestern Newfoundland was also drenched with at least 150 to 200 mm of rain, including a report of 242 mm at an unofficial weather station in Tompkins. Several sections of the Trans-canada Highway in southwestern Newfoundland also flooded or washed out, leaving residents stranded and ferries diverted to Argentia. Repairs to road infrastructure in both provinces are still ongoing. Powerful winds well over 100 km/h also knocked out power to many in the region. HERE COMES LARRY Hurricane Larry was another big story this year. Larry made landfall in Placentia Bay near South East Bight, N.L., around 1:15 a.m. NDT on Sept. 11. While the rainfall associated with Larry wasn’t as significant as the late November storm or past hurricanes, it brought hurricane-force winds to much of eastern Newfoundland, including peak gusts of 145 km/h at St. John’s International Airport. A gust to 182 km/h was also recorded at a weather station in Cape St. Mary’s. SEA ICE LACKING The lack of sea ice in the Northumberland Strait and Gulf of St. Lawrence last winter also made my list. Warmer than normal air temperatures and frequent storms prevented substantial ice from forming last season. The lack of sea ice can have detrimental impacts on marine life but also can lead to coastal erosion without ice to protect from winter storm surge. Let’s hope this season is different. What weather story sticks out for you? #Askallister your weather questions and send him your weather photos: weather@ saltwire.com. Allister Aalders is a weather specialist with Saltwire Network. Reach him at allister. aalders@saltwire.com