Anytime he sets foot on a stage, Ashley Macisaac can count on an attentive audience with toetapping fans in step with his fiddle. That’s the scenario he and his sister Lisa Macisaac anticipate when they finish a six-show Maritime tour Dec. 2 at the Port Hawkesbury Civic Centre, not far from their childhood home in Creignish. The siblings and piano accompanist Hilda Chiasson are hitting familiar ground with a tour that opens Nov. 25 at the decoste Centre in Pictou. The other Nova Scotia dates are Nov. 26 at the Carleton in Halifax and Dec. 1 at First United Church in Truro. The New Brunswick shows are Nov. 29 in Saint John and Nov. 30 in Fredericton. “Family and friends will be there. It’s almost like when you’re playing in front of your high school when you’re a kid. You don’t get away with doing it wrong,” said Ashley. The Christmas-themed tour marks the first time in their respective careers that the Macisaacs will perform together for full shows. On the few previous occasions when they collaborated on stage, it was usually just for a number or two. Lisa would normally be touring with Brenley Maceachern and their band Madison Violet, but COVID has cancelled countless domestic and international tours during the past year and a half. So, the Toronto-based singer, songwriter and fiddler welcomed the opportunity to come home to the Maritimes and perform with her brother. Although she’s travelled worldwide, just like her older brother Ashley, Lisa still experiences a special feeling when she performs close to home. “We’ve toured all over the world for audiences large and small, but there are three cities or towns that give me extra butterflies — Toronto, which has been my hometown since 1999, Halifax and Port Hawkesbury. Those three places just give me that extra bit of joy, performing in them.” With a mixture of Celtic and Christmas music in store for the Macisaacs’ homecoming tour, a family theme is very much in the forefront. Ashley said their father is battling health issues and might not be able to attend, “but definitely my mother will.” Lisa said their father is an inspiration as he maintains a cheerful attitude despite his health woes. Cape Breton is renowned for its musical family groups, but the Macisaac siblings took separate paths to fame. Ashley was still in high school when his fiddling prowess vaulted him to the big stage. A few years later, Lisa blended her singing and instrumental abilities to carve her own career as part of Madison Violet. “I would say that it’s not unusual in Nova Scotia for families (to perform together),” Ashley said. “Obviously we’ve had the Barra Macneils and the Rankin Family, but that never really dawned on us to do a family thing. There’s just the two of us as musicians. Our older brother, Henry Snow, passed away a few years ago. He played some music but he wasn’t a musician per se.” Along with fiddling and dancing and singing, it wouldn’t be a family Christmas show without storytelling and poking fun. “I think it’s going to feel like a kitchen party,” Lisa said. “Ashley and I have very different personalities, but also we’re cut from the same cloth. I think you’ll get a lot of stories about our childhood. We love to pick at one another, but in a playful way.” Ashley also expects plenty of banter about childhood memories. “One of the best parts of the show that I can imagine will happen is just the fact that’ll we’ll probably argue and bicker on stage a lot, as we tend to do when we’re on the phone anyway,” he said with a laugh. Of course, classic Christmas carols are part of the program. “I really like White Christmas,” Lisa said. “That song resonates with me in its simplicity.” She sings a “beautiful version” of that holiday standard, Ashley said. “The traditional Christmas songs are important to me. I play them every year on the violin. I think I do a pretty nice rendition of O Holy Night that I released on a Christmas album years ago.” 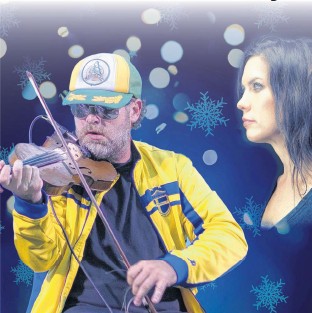