SPRINGHILL, N.S. – The Cumberland County Blues honoured its top players during the club’s recent closing award ceremony in Springhill. Yanick LeBlanc picked up the Top Scorer Award after scoring 18 goals and adding 21 assists for 39 points in 26 games, while he shared the Most Valuable Player Award with goalie Joshua Doyle, who had a 4.82 goals against average while facing 1,087 shots during the season. Jacob Estabrooks, who had three goals and 14 assists for 17 points in 30 games, earned the Top Defenceman Trophy and also earned the Top Rookie Award. Veteran forward Landen Clarke, who was second in scoring with 23 points in 29 games, was presented the Most Sportsmanlike Player Award, picking up just 10 penalty minutes on the season. He also earned the Players’ Choice Award. Jayden Matheson, who joined the club mid-season from the Truro minor midget AAA team, had six points in 18 games along with two penalty minutes. He was presented the team’s Most Improved Player Award. Chad Miller, who had 21 points in 29 games along with 94 penalty minutes, was honoured with the Fans’ Choice Award. 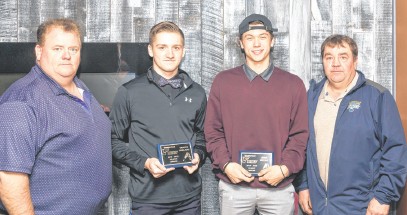