Viking Pantry food service continues its success at Amherst Regional High School. AMHERST, N.S. – When she first introduced the concept of a food pantry for students at Amherst Regional High School, Jennifer Hines wasn’t sure how it would be accepted by the school community. Now, a little more than two years after the Viking Pantry first opened, she is overwhelmed by the response and acceptance by students, staff and community. “We started out with a lot of uncertainty. We didn’t know what it was going to look like or how students would respond, but it has been great,” Hines said. “It has really exceeded what I thought it would do.” Hines started the pantry in the resource room at the high school in November 2017 after seeing a story about a food bank that was set up the previous year at J.L. Ilsley High School in Halifax. She figured if it would could work there, it could also work here. “The response has been tremendous both within the school and outside the school. Sometimes you wonder when you’ll outlive your welcome but everyone continues to be so supportive.” At the beginning, the pantry, which is completely anonymous, offered students an opportunity to come into the centre and pick out some grocery items to take home with them. With community and school support, as well as some successful grant applications, the program was expanded to enable students to come into the centre during lunch hour to pick out something to eat. The tables in the resource centre are used by the student to eat what they prepared. There are also healthy snacks, such as fruit, along with staples like macaroni cups, canned meat, noodles. There’s also oatmeal as well as personal hygiene products. Thanks to the help of the school advisory council, a fridge was added while there is also a small freezer and food handing and preparation information on the bulletin board. “Word-of-mouth is our greatest advertiser,” she said. “You constantly see new faces at the door. The first six months we were here the students were basically grabbing and going. Now the students are sitting here and socializing. I bring boardm-games out and they make it their lunch hour. That tells me they’re comfortable and don't mind being seen in here.” Hines uses money donated to purchase food while students and staff often bring food into the school to donate. There is a collection bin at most school events, such as basketball games, while people from the community often visit the school with donations of food and money. All money collected is spent on food for the pantry. About a year ago, the pantry began distributing clothing items to students. The clothing is all donated and has included winter jackets and backpacks. The biggest thing, she said, is there are no questions asked and if a student needs something he or she is invited to come into the pantry. There’s no paperwork to fill out or registration to be done. The program has also expanded within Cumberland County to schools in Springhill and River Hebert. It has also been repeated at other schools across the province and Hines said she is often called by other schools asking how she started Viking Pantry. “We started small and then it morphed into snacks at snacktime because the students were asking,” she said. “Then it became lunchtime and then clothing. Sometimes a student will come in for a winter coat, boots or a backpack.” She said as many as 50 students are coming into the centre during lunch. She said it could be as simple as a student forgetting their lunch at home or on the bus, or not having anything in the cupboard to bring to school to eat. It also has positive educational outcomes. She said there are studies showing students who have full bellies often do better in the classroom. She’s hopeful the future includes a National Food Program that would see a federally-funded lunch program. She’s also hoping to collect more easy-to-prepare lunch foods. The pantry just started a salad bar that has gone over very well. “In demand are the healthy things I never thought we’d see. I thought it would be a longer term evolution. I got a grant last year and didn’t really know how it would go, but when I hear students say there aren’t any apples I know we’ve made it.” 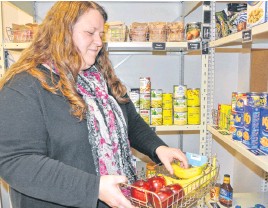