Cote Always Up for a Challenge 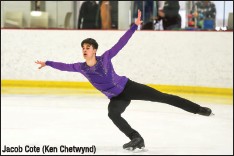 When Jacob Cote first put on skates, figure skating wasn’t part of the plan. He was just six years old and participating in the CanSkate program. But after his first taste of competition, he fell in love with the sport. Now 17, Cote owns a national bronze medal and does a triple toe, triple toe combination that his coach, Kyla Upton, says he executes with great speed and flow. Never shy to take on a challenge, the Dartmouth skater is working on a Triple flip and Lutz that he aims to land at major competitions this season as he jumps to the junior division. He’s also trying pairs for the first time, partnering with Caroline Mayo. The two hope to qualify at the pre-novice level for the 2023 Skate Canada Challenge in January and compete at the Canada Games in February. When Cote isn’t training, he volunteers with the CanSkate program at the Dartmouth Skating Club where he has become an inspiration for younger male figure skaters. “O How it started: riginally, I did the CanSkate program. There are many people who do it and not just for figure skating but for hockey, too. I never really had figure skating in mind but my sister (Gabrielle) got into it and then my parents were like, ‘Why don’t we just give it a try?’ “I didn’t really feel attached to it at first. It took a little while until I started to do it competitively and I just loved it and kept on going with it. “I actually did gymnastics, too, at that time and I had to choose between the two of them.” The best parts: “There’s just this sense of freedom I feel when I skate. There’s nothing that really replicates it. When I skate at maximum speed, just the air pressing against my face, I love it. Besides competitions, there’s no stress at all that I feel when I skate. “I have a lot of friends at skating. Every day I wake up and I look forward to going to skating.” On winning national bronze in novice: “The short program, I wasn’t too happy with it. But I kind of set it aside and then did better in the long to be able to come back. I think that competition was a very good lesson. This is what my coaches mentioned to me, too, that’s where I really learned to compete. Even if I messed up, I was able to put that aside and just focus on exactly one thing at a time.” On trying pairs: “We started that for fun for an ice show last December. It just kind of stuck. Our coaches were like, ‘Oh, wow, you guys are pretty good.’ “We tried a competition. It started off a little rocky but that’s because we were just learning it and got to work with specialized coaches and now it’s actually going pretty well.” On coaching with CanSkate: “I love teaching the kids how to skate and I love seeing their improvement.” On moving up to the junior division: “It’s a big step up, but I’m looking forward to it.”