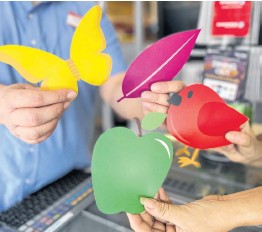 Shoppers Drug Mart is calling on their customers and community members across Nova Scotia to help local women’s shelters support women who are fleeing domestic violence. The LOVE YOU by Shoppers Drug Mart fall fundraising campaign, Giving Shelter, is underway for its third consecutive year, running until Oct. 14. Funds generously donated by customers go directly to women’s shelters in their area. Two participating store locations in Bridgewater and New Germany are collecting donations for Harbour House in Bridgewater, which serves women and their dependent children in all communities in Lunenburg and Queens counties. A concerning 44 per cent of women have reported experiencing some form of psychological, physical, or sexual violence by an intimate partner in their lifetime. This means most Canadians likely know a woman affected by domestic violence, but who may be afraid to speak out. Historically, domestic violence increases at a time of economic downturn, and the pandemic has exacerbated health and economic inequities already faced by women — creating a “perfect storm” for women’s shelters and their clients. As Canadians face the highest costs of living since the 1980s, many survivors of domestic abuse cannot “just leave” because they depend on their abusers for basic needs and have few means of escape. Women’s shelters offer critical help to women who experience intimate partner violence, providing a safe place to stay along with programming, advocacy and other supports at an extremely vulnerable time in their lives. Your support of this work is more important than ever, and it is easy to donate during the LOVE YOU by Shoppers Drug Mart Giving Shelter campaign. The in-store campaign gives customers the opportunity to purchase and personalize LOVE YOU by Shoppers Drug Mart icons, which are prominently displayed on the campaign tree in all participating stores. Customers can purchase a “leaf” for a toonie, a “butterfly” for $5, an “apple” for $10 or a “bird” for $50, with 100 per cent of funds going to each store’s local partner shelter. The Giving Shelter annual fall fundraiser is one of the leading partnership campaigns of the LOVE YOU by Shoppers Drug Mart platform — the company’s commitment to putting women’s health first. Please donate if you can. In addition to the in-store fundraising campaign, the LOVE YOU by Shoppers Drug Mart program is also proud to announce a $300,000 donation to Women’s Shelters Canada. This will enable them to offer grants to women’s shelters across the country to help address the significant increase in their needs since the start of the pandemic. “Advancing women’s health equity is an incredibly important issue, and something we are dedicated to supporting and raising awareness around,” says Paulette Minard, director, community investment, Shoppers Drug Mart. “We know that women are more susceptible to gender-based violence and, while the grant program is not a solution to the complex issue of domestic violence, it is an important first step in supporting women and families across Canada.”