Setting sail across the ice 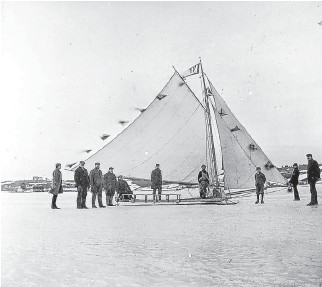 With the coldest months now upon us, you may have the good fortune of witnessing the sights and sounds of ice-boats whizzing across our frozen lakes and shallow harbours. Ice-boating has a long history dating back to at least the 17th century, and in the late 18th century Dutch immigrants introduced recreational ice-boating to the Hudson Valley Region. The sport quickly grew in popularity, and races were staged in northern regions across North America. In Atlantic Canada it was particularly common in fishing communities like those in Lunenburg County and elsewhere along the South Shore, where sailing was already a part of life. The sport’s popularity can be attributed in part to affordability and ease of construction. Homemade ice-boats, also referred to as ice yachts, were simple framed vessels assembled out of old building materials, bed frames, and other miscellaneous bits and bobs commonly found around the home or barn. They were equipped with old skate blades and a small mast and sail, typically borrowed from a dory or other small craft. During the years of the Lunenburg schooner fishery, the dory sails used on the offshore banks were often repurposed on the ice, where fishermen and their friends flew across frozen harbours racing each other on homemade ice yachts. Like dory fishing, ice-boating required guts. These small simple vessels could reach extraordinary speeds. On optimal ice conditions (which can be found in Nova Scotia) modern iceboats can travel more than a hundred kilometres an hour. While their earlier forms were undoubtedly slower, they surely provided the adrenaline rush needed to warm someone up on a cold winter’s day. Ice-boating decreased in popularity during the second half of the 20th century — you are less likely to see ice-boats today than a hundred years ago. Still, there is a small group of brave souls who carry forward this recreational tradition and sail across our frozen expanses. Adrian Morrison is curator of collections at the Fisheries museum of the Atlantic. The Fisheries Museum of the Atlantic & Bluenose II are proudly managed by the Lunenburg Marine Museum Society. For more information on the LMMS and to become a Dory Mate visit https:// fisheriesmuseum.novascotia.ca/ about-museum/dory-mates