A springtime salad for the ages

Terry Bursey shares his recipe for a springtime signature salad featuring NL elements and a creative twist. I’m the type of guy who likes a little too much meat in his diet. I love animals and lament the thought of killing one needlessly, but something about a steak slathered in garlic butter, overflowing with dusted onions and peppers, just throws all empathy out the window for me. Oddly enough, springtime seems to be when I tend to favour veggies and fruits over meat and processed snacks in an effort to battle the begrudgingly brazen bulge from winter. With this in mind, I thought I’d write about my favourite springtime signature salad. Coming up with this recipe was an absolute necessity. The salads I was accustomed to were often high calorie Newfoundland abominations made with boiled eggs, bits of pasta and ham all slathered in much-toomuch dressing. I wanted to impress a private dining client with something that had some Newfoundland elements but wasn’t so off-the-fine dining mark as to seem like something Nan could have easily made on the fly. My client specified that he wanted a meal with a Newfoundland base theme, but with a creative and high-class twist – something I as becoming known for when it came to my private cooking style in the area. I decided pickled beets were the direction to go with the salad, as they are a precious preserve here on The Island and a cultural phenome. Pairing it with something equally bold in flavour but with a more coarse texture was the hard part but, in the end, I settled on a feta cheese crumble. As for the greens and dressing, well, see for yourself. Springtime Beet and Feta Salad 2 lbs pickled or cooked beets (roughly 2 mason jars) 4 cups beetroot leaves 3 cups spinach leaves 3 cups green beans 1 tbsp red wine vinegar 1 tbsp minced garlic 2 tbsp extra virgin olive oil 1 tbsp capers, coarsely chopped 2 cups crumbled feta cheese DIRECTIONS: Trim and wash beetroot leaves along with all other greens. In a large saucepan, cook beetroot leaves for 5 minutes on a simmer, remove from saucepan into ice water using a slotted spoon and cook the green beans in the same saucepan of simmering water for only 3 minutes and shock in ice water as well. Place leaves and beans in a large salad bowl. Slice beets into thin crescents and place in bowl as well. Add all remaining ingredients aside from feta and toss thoroughly. Serve in accommodating bowls and top each with crumbled feta. Serves 4 - 5 people. While the main course of butternut squash soup failed to raise as many eyebrows as I would have liked, my client was extremely pleased with the salad portion of the evening and asked me for the recipe. I refused the man, but you readers? How could I refuse you? Happy spring! Terry Bursey, otherwise known as the Food Dude, is a Newfoundland chef transplanted to Ontario who enjoys putting his mark on traditional recipes and inventing new tasty treats with unexpected ingredients. Reach him at thefooddudecolumn@gmail.com. 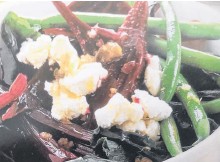