Jory Parsons of the Titans will be called upon to play a pivotal role in the quest for a sixth straight title. EDITOR’S NOTE: This is the fourth in a series of profiles on football Titans who coaches believe will be a key to success during the 2020 season. SACKVILLE, N.B. – “Jory Parsons is the real deal,” says Joe Lafford, the veteran Titan who has been coaching offensive linemen during Tantramar’s five time run to the provincial football title. Lafford says the big lineman is tough, quick and has good upscale – in other words he still has room to grow and develop. And Parsons stresses that his coach has gone far beyond teaching football but has taught him many positives about life itself. But he is looking forward to welcoming former CFL lineman Matt Albright. “It will be different not having coach Lafford there, but the line will continue to be in good hands.” Parsons provides his quarterback with outstanding protection as the man who snaps the ball on offense and then, like many others, stays on the field to man the middle linebacking position. He has developed a good relationship with QB Jesse Estabrooks, so they are on the same wavelength, while he says defensive linemen like Chase Clayton provided him with fine protection when he lines up on defense. He has been an important cog in helping the Titans to their last three championships and believes a sixth will be added in 2020. He says each of the last three teams have been different, with last year’s having overcome a good deal of adversity when the league rules were changed, which made one of their players ineligible. But he says the Titans have always fielded strong lines – the first domino in building for success. Jory says he is excited to get back on the field, even though he is a key player with the hockey Titans. “We will have five experienced linemen with a new coach,” he says, “and I believe we will be the best unit in the league.” Looking at the fact the team will be graduating 11 players, several of whom became household names, Jory sees several young men stepping up to take their places. He feels Elliot Hicks is prepared to assume the tailback spot while others like Ethan Cormier and Ethan Doherty will entertain fans with speed and skill. Meanwhile, he says the enthusiasm, intensity and drive brought to the team by coach Scott O’neal will remain. “It’s been an honour to have played football under such leadership and his legacy will live on.” Jory has never tried out for Team New Brunswick but last year was named to the Nissan All-canadian team, which meant a trip as a guest to the Grey Cup, and while there he said he participated in a game. With a positive attitude and confidence in his teammates, this 17-year-old, six-foot, one-inch 220 pounder is more than ready to sacrifice his body in order to uphold the school’s legacy – epitomized by Titan Pride. 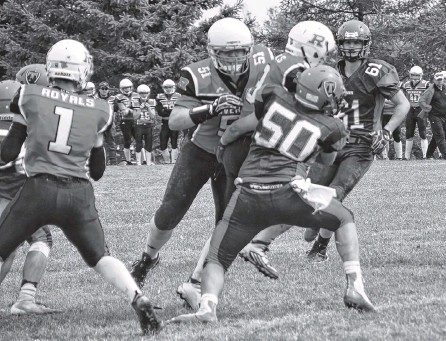