SACKVILLE, N.B. – The opportunity to study and play hockey on the east coast made Mount Allison University a clear choice for Sam Jarron. “The Mount Allison campus is so beautiful, and when I came for a tour people talked about how wonderful the community is,” said Jarron, a second-year Mountie from Ajax, Ont. “My tour guide was also amazing." Jarron began playing hockey at age five, and from ages eight to 12, she played with the Ajax Knights. She then moved on to the women’s league to play with the Durham West Lightning and Clarington Flames. Before coming to Mount Allison, she played a year of junior hockey with the Toronto Wildcats. She credits her most memorable sporting moment as unexpectedly making the Lower Lake finals with Clarington in 2016. “We didn’t win the championship, but we did beat the top team in the league at the tournament,” she says. “I have never seen a group of girls so happy. It didn’t matter the final outcome and it’s one of my favourite moments because it shows hockey is about more than just winning.” A multi-sport athlete growing up, she also played volleyball, track, and rugby at Ajax High School, all while making the honour roll every year. She was awarded junior and senior female athlete of the year and received an athletic letter for her multi-sport participation. Jarron says she enjoys the fast pace of the game and being able to make immediate friends. “You know when you come here you will have 18 best friends,” she says. Playing defence, she believes her greatest strength is her passing ability. “I can see a lot of open lanes and get the puck to people even if you wouldn’t think they were open,” she says. “I like to think I set a lot of people up to make a play.” Jarron was named athlete of the week this past season for her two power-play goal performance in a tight game vs. St. FX. “It was really nice to be recognized and it meant even more to me because my brother was there to see the game from B.C.,” she says. A biology student, Jarron is interested in pursuing graduate studies in marine science. 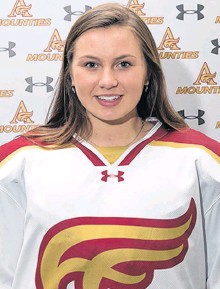