CONCHE, N.L. — Ida Gardiner is modest about winning a top provincial award, crediting community support for helping her build award-winning teams. The former coach of junior broomball teams from Sacred Heart All Grade School was inducted March 11 into the Broomball Newfoundland and Labrador Hall of Fame. “I felt privileged and I was happy," Gardiner said, "but it was a whole community. I didn’t just do it myself.” The ceremony in Port aux Choix was held during the senior broomball provincials the first weekend in March. Gardiner, who grew up in Conche and was a teacher there for 30 years, started coaching junior girls broomball teams in the 1980s. She loves sports, and is a hockey fanatic, but admits she wasn’t much of an athlete as a child. “But I love coaching.” With no indoor rink, Gardiner’s teams had to practice on the old airstrip or on the harbour ice. “The men used to shovel it off and then in the evenings they would be up there in trucks with the lights on the ice to let them practice,” Gardiner recalled. In 1989, she took a team to the provincials for the first time. St. Anthony hosted. And Gardiner’s team won. “We won the provincials that year and then we went to New Brunswick and won the Atlantics, and I think there were four out of six on the dream team from Conche. We never lost a game. “It was pretty amazing, and it was great for the kids.” The collection of broomball awards for Conche teams grew after that, with several provincial trophies. They also competed at numerous Atlantic tournaments and a few national tournaments. “They always had fun at the tournaments, and it was great socialization for the players as they always hung around the arena and watched other games as well,” Gardiner said. It also gave them a chance to meet new friends and see new places beyond their small hometown. “They were among themselves all the time here in the school. It was only just them.” Gardiner says it was community support that helped make it happen. It meant fundraising on many weekends through the year — from bingos to bake sales and more — to enable them to attend the tournaments. Everyone locally was behind the team, she says. People from communities around the region also helped. “I wouldn’t have this award only for that because we wouldn’t have been able to do it.” There’s no junior broomball team in Conche now. By the time Gardiner retired in 2008 there were only 23 children in the all-grade school. They had to give up on broomball a few years before that because there just weren’t enough girls from Conche, or nearby Croque, to make up a junior team. In fact, there’s no junior broomball in the province. Only memories remain, and Gardiner has a lot of them. “They (girls) loved it and they played their hearts out,” Gardiner said. “Everyone was so proud of them. “They used to have parades and everything when they came back. It’s not only the winning part of it. It was a big part of the community. It just made everyone feel pretty good.” Following the award presentation Gardiner received many messages of praise on social media. Former teaching colleague Mary Foley says Gardiner, “unselfishly gave of her time, talent and advice for students to make the best of what they had when our school was without a gym.” She also noted Gardiner also devoted countless hours to fundraising, making travel arrangements and ordering jerseys for the team. Foley’s daughter was a member of one of the teams Gardiner coached. She says parents held her in high regard, and respect, as did the players. In a Facebook post, Foley wrote, “She taught them valuable lessons in sportsmanship ... respect for all teams, and in having fun. The team ‘Stingers’ will be forever grateful for those fun times and wonderful years. Because you cared, our children will have wonderful memories to cherish forever. We will be forever grateful.” Still, Gardiner remains modest. “I didn’t feel like taking all the credit because I had lots of people helping me. “I loved coaching. It was rewarding. But you can’t feel like that unless you got a good group of kids. And you must have a lot of people behind you.” 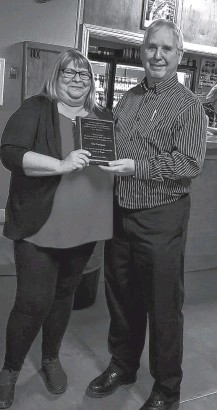