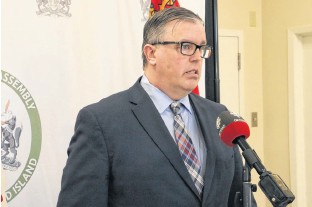 CHARLOTTETOWN P.E.I.'s environment minister has conceded that a controversy around construction of a north shore property has highlighted the need to strengthen the province's shoreline protection policies. During question period on Nov. 17, Environment Minister Steven Myers was the target of several questions from fellow Progressive Conservative MLA Sidney MacEwen, whose district includes development of a property at Point Deroche that juts out into the shoreline. The Point Deroche development has drawn significant criticism in the area after images of piles of large armouring stones spread along the beach in front of the property were circulated on social media. The property had been on the edge of the Gulf of St. Lawrence, but shoreline erosion had eaten away at the coastline next to the home. After it was sold in 2020, the new owners began an extensive rebuild, involving piles of armouring stones, which jutt into the shoreline. “It looks like Peggy's Cove is there,” MacEwen told the legislature on Nov. 17. “Minister, what are we doing as a province when it comes to armour stone on our coastlines – and allowing it or not allowing it?” MacEwen asked. In response, Myers noted that the P.E.I. government uses armouring stone to protect some government-owned buildings. Myers said a new policy around use of the stone on coastlines is needed, but he also said Islanders should be consulted. He also suggested that in some coastal areas that are more vulnerable to erosion, buffer zones should be increased. “I realize it's not a very good answer, but it's the best answer I can give you. We have to make changes. We're working on policy now,” Myers said. MacEwen said that in some areas, longer buffer zones are needed in more erosion-prone areas. The province's buffer zones are defined as being 15 metres from the high tide mark. But MacEwen noted the recent coastal damage caused by post-tropical storm Fiona highlighted the need for more stringent buffer zone protection in more vulnerable areas. “I've heard you talk about the (climate) adaptation plan, but what concrete actions are we going to see in 2023 so that we can start looking at a different type of buffer zone, especially in these erosion-prone areas?” MacEwen said. “We will have a better policy for 2023. That's something that the staff is currently working on and looking at what the best practices should be,” Myers said. “There's a really big, tough question that needs to be answered here, and it has to be answered quick. So, I'll commit to having something done next year.” SaltWire asked what specific policies will be changed in 2023. A response was not received by deadline. Myers also suggested that the longer buffer zones in more erosion-prone areas would prohibit construction of homes near the shore due to the threat of climate-change driven erosion and flooding. “Savage Harbour has probably the fastest erosion rate on Prince Edward Island, versus maybe the Brudenell River doesn't,” Myers said. “We may not even be able to build there. There might come a point in time where we say that's not even a place where we're going to allow you to build anymore because we know what's going to happen there over the next 50 years.” NOT FOLLOWING POLICY: BEVAN-BAKER Green Opposition leader Peter Bevan-Baker also asked Myers about the Point DeRoche development. Bevan-Baker, who has been critical of the province's 2020 permitting approval of the development, referred to a provincial coastal property guide. The guide states that “almost all activity within the buffer zone is prohibited.” The guide also states that use of shoreline stabilization is not recommended. “Why are you not following the existing policy, which is so clear on this issue?" BevanBaker asked. "I think you answered your question when you said ‘recommends,'” Myers responded. “It's not outlawed. So, there's no policy that says you can't do it. The department recommends that you don't because you're going to float away to sea, which we saw houses float away to sea during Fiona."