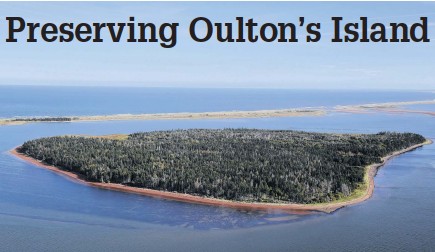 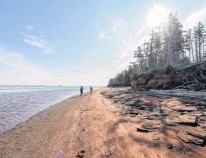 ALBERTON - A small island in P.E.I.’s Prince County will soon be a dedicated nature haven for some of the province’s most at-risk species. Kwesawe’k – or Oulton’s Island – will soon be purchased by the Nature Conservancy of Canada with the goal of turning it into a protected natural area. NCC will own the island for the next five years, after which time it will be donated to the P.E.I. Mi’kmaw community to steward the land. Lanna Campbell, program director for P.E.I. with the NCC, told SaltWire Network on Nov. 10 this project has been about 40 years in the making. “The first evidence of NCC first mentioning wanting to buy the Island was in 1983,” said Campbell. “We’ve certainly had our eyes on it for a while." The 211-acre island in Cascumpec Bay sits just off 400 metres northeast of Alberton and is uninhabited, making it a haven for bird colonies and small mammals over the years. The island, which holds wetlands and an old growth Acadian forest, has about four kilometres of coastline, making it ideal for a protected natural site. “Every time we visit the Island, we find new things,” said Campbell. “Recently we found a great blue heron colony there, and a double-breasted cormorant colony was nesting as well. I feel like we’re going to keep uncovering elements of its ecology.” NCC usually targets offshore islands for its land conservation efforts in the Maritimes, as they often see little human interaction. It does not have many plans for conservation work to take place yet, but by conserving and preventing future development, it can stay a haven for wildlife without much interference, said Campbell. “Every conservation effort is really different. There is no template, and it’s always unique to the situation, but it definitely feels like this is one of our first in Atlantic Canada and so we’re really excited about that,” she said. NCC has been working with the P.E.I. Mi’kmaw on conservation efforts for over a decade. When the purchase of Kwesawe’k became a reality last year, the choice for who should own it going forward was obvious for the NCC, said Campbell. “We knew that there was interest in seeing this area conserved from their point of view because of its cultural significance,” she said. When the five years is up, Kwesawe’k will be donated to the P.E.I. Mi’kmaw community, which has happily agreed to take over stewardship of the land. “We’ve spent a lot of time together on the land this summer and we seem to all have a shared goal to see P.E.I. protected. It feels really good,” said Campbell. Lennox Island First Nation Chief Darlene Bernard told SaltWire Network on Nov. 10 it is crucial to protect the island for future generations. “It’s important because it has rich wetlands and an old growth forest. It’s also a breeding ground for different birds and four-legged animals,” said Bernard. It’s also a significant act towards reconciliation, as the island was inhabited and used by the Mi’kmaw for thousands of years. “We have a connection to the land. This is the land of our forefathers and ancestors,” she said. Bernard remembers when discussions about purchasing the privately-owned island began in 1983. At that time, Indigenous people were prohibited from even visiting Kwesawe’k. “With colonization and residential schools, all of those things that marginalize the Mi’kmaw had pushed us away from the work that we’d done and the principles that our ancestors lived by,” she said. Once it has ownership of the island, traditional approaches will be used to carry out their maintenance and conservation efforts, including using a two-eyed seeing approach to how to protect the land and respectfully acknowledge its history. “We need to look at things from a historical perspective and a first nation’s perspective, but we also have to look at it from a western perspective as well,” said Bernard. There are plans to carry out archeological work to discover any possible remnants of human interaction on the island, and Bernard said she feels very hopeful something will be discovered. “We look forward to future generations carrying out this work and finding that story. Because there is a story there; it’s probably just under the first layer of earth,” she said. Under the new ownership, the island will be open to the public to visit by boat, as it’s important the public doesn’t feel it will be off limits. “Certainly, people can go over there if they have a boat and take a walk around,” said Bernard. “It’s not about restricting people. The more land we preserve as a natural-wide space the better. We don’t have a lot of wild areas left in P.E.I. It’s important we save them because we’re running out.”