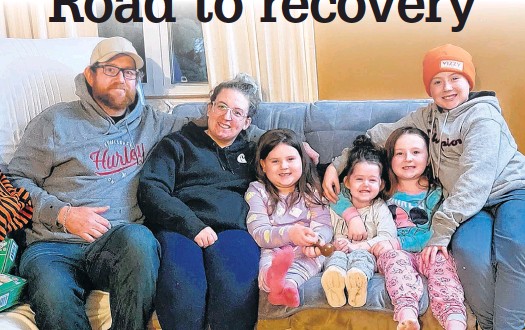 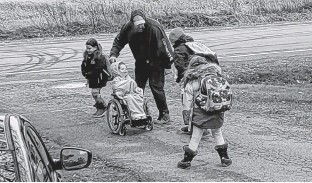 BORDEN-CARLETON, P.E.I. – After being struck by a car and spending more than five weeks in hospital, a Borden-Carleton kid is back home and on the road to recovery – a “bittersweet” feeling for her mother, Megan Aylward. “Once you get home you realize that things aren't going back to the way they were prior right away, which is a struggle,” Aylward said in an email to SaltWire Network. “But we all missed the other three children so it's nice to be home.” On Oct. 10, Blakely White, 3, and her siblings were playing in the driveway of their Borden-Carleton home, Blakely's older brother shooting hockey pucks at the net. Blakely and her older sister Braelyn went across the street to retrieve a few that had strayed from the yard. While crossing the street to come back home, just before stepping over the white line onto the walking path, Blakely was struck by an oncoming car. “I didn't actually see it happen, but I heard my son screaming ‘Blakely got hit' over and over,” said Aylward. “It is something that plays in my head over and over.” Borden-Carleton firefighters attended the scene and Blakely was rushed to the Prince County Hospital in Summerside. There, a CT scan showed that she had sustained a neck injury as well as a severe traumatic brain injury. “We were devastated,” said Aylward. “Severe brain trauma is not something that has a definitive outcome, it can go anywhere from full recovery with issues showing later in life, to death.” Blakely's prognosis, Aylward added, was uncertain, as she had a few small brain bleeds; doctors were uncertain what areas, if any, would be permanently damaged. Despite the extent of her daughter's injuries, Aylward felt fortunate that, even after being tossed from the road, Blakely had not damaged any organs or broken any bones. Blakely was airlifted to the I.W.K. Health Centre in Halifax and admitted to the hospital's Pediatric Intensive Care United. There, she was intubated for several days to help her breathe. On Oct. 16, for the first time since the accident, Blakely was extubated and her parents were able to hold her in their arms. A few days later, doctors moved Blakely to the medical floor after discovering swelling in her airway. Not long after, Aylward began noticing her daughter was beginning to make a recovery. She was still unable to speak, move the right side of her body and had limited mobility on the left side, but Aylward could tell that Blakely was at least aware her parents were near her. Aside from a few trips Blakely's father, Jonathan White, made back to P.E.I., her parents remained with her for her entire stay in the I.W.K. “The first few weeks were the most difficult,” said Aylward. “Moving to the medical floor and seeing her struggling to breathe was terrifying. Every day seemed to blend into the next.” COMMUNITY SUPPORT The weeks spent at the Halifax hospital, said Aylward, were made easier with support from hospital staff, family and friends. Not long after the accident, Passion Elite Cheerleading in Charlottetown – a cheerleading team two of Blakely's sisters are involved with – and Amherst Cove Consolidated School organized fundraisers. Kathy Aylward-Cormier, Aylward's aunt, also set up a GoFundMe page to help ease the family's financial burdens. She, in Ontario, was unable to support them in person, but wanted to help in whatever way she could from a distance. As of Nov. 21, the GoFundMe had raised more than $9,000. “It's awesome. I was really excited when I saw that,” said Aylward-Cormier. “It's really exciting to see that, that it made such a difference. Every little bit helps.” Aylward is grateful for the support but is not surprised to see the Island community step up when her daughter was in need. “We are not exactly a small family with four kids so we rely on a lot of family support to get our kids in various directions with sports,” said Aylward. “The outpouring of love from strangers and people in our community wasn’t exactly unexpected either. P.E.I. is a pretty special place to live with an abundance of love and support.” ROAD TO RECOVERY After more than five weeks spent at the hospital, by Nov. 16, Blakely had recovered enough to go back home. “(Her siblings) Bentley, Braelyn and Brielle are handling it as well as any kids witnessing their sibling being hit by a car can be,” said Aylward. “They are super helpful with her and made sure to video chat with her daily right from the beginning.” In the aftermath of the accident, Aylward said she wants to remind drivers to slow down and follow the rules of the road. While her daughter survived, she knows not everyone is as fortunate. “Careless driving could cost someone their life,” she said, “and is getting to where you’re going five minutes faster really worth the mental load of being the reason someone loses a loved one?” As of mid-November, Blakely had regained control of the right side of her body. While her vocal cords are still swollen, she has started talking again. For the foreseeable future, Blakely will need a wheelchair and a walker to get around. Aylward adds, though, that she is “strong-willed” and healing faster than they expected. Her parents have no expectations for her long-term recovery; for the time being, they’re focusing on play-based therapy to help Blakely regain her core strength. “At the end of the day, we as a family are just so glad that she is still with us,” said Aylward, “and the rest we will figure out along the way.”