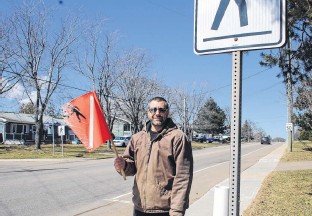 SUMMERSIDE, P.E.I. – Summerside councillors have decided against reinstating a crossing guard on South Drive south of Pope Road, near Greenfield Elementary, – at least for now. Jonathan Vickerson, who lives on South Drive near the school, still hopes for a crossing guard in the future but said he’s glad councillors have at least discussed it. “Obviously, I’m not going to just say ‘oh yeah, that’s enough,” said Vickerson, who is unsurprised by the outcome. After SaltWire Network spoke to Vickerson in midApril regarding his desire to see a crossing guard posted at the crosswalk, a Summerside police officer monitored the crossing over a subsequent Monday and Tuesday morning to observe the student foot traffic. The officer, Chief Dave Poirier told council at its May 3 meeting, saw a total of five children cross South Drive, either just south of Pope Road or at the intersection of Charlotte Drive. Three were on bikes and two on rollerblades. Oncoming traffic, noted Poirier, did stop, despite the fact the children did not use the orange flags or the flashing lights provided at the crosswalks – which the officer then reminded them to use. “There’s no problems with traffic stopping,” said Poirier at the council meeting. “But South Drive’s kind of a thoroughfare and it’s a quite busy spot.” At the council meeting, Coun. Bruce MacDougal, who represents that part of the city, mentioned that he had also been keeping a closer eye on the crosswalk during his walks in the area. After a few days of observing he also noticed the low numbers of people, children or otherwise, crossing at the crosswalk just south of Pope Road. He also noted that on one of those days the flags were thrown on the road. “I (saw) a few, but not much. Up at the other side, I’ve seen them crossing, but they don’t like using flags,” said MacDougall. “I was glad to hear that the police were there today to tell them to use flags.” MacDougall also noted that he had spoken to the vice-principal at Greenfield Elementary to ask if there had been any issues school staff were aware of. “He said they thought they had a little bit of an issue but it was addressed a bit or so ago,” said MacDougall. “I asked him to contact the home and school, gave them my number and asked them to call me. I never received a complaint from anybody else.” Due to the lack of heavy foot traffic, the presence of the crossing flags and lights and the fact that police observed traffic stopping for pedestrians, council decided against hiring a crossing guard for this area, at least for now. Poirier also noted that the city only has five full-time crossing guards and two parttime ones; sometimes police officers need to cover a crosswalk if there are no guards available. In lieu of the crossing guard, Coun. Barb Ramsay suggested, at the beginning of each school year, having officers educate students on the proper way to cross, as they did at Elm Street Elementary when signal flags were added to the corner of Elm Street and Willow Avenue. Although councillors decided against a crossing guard, MacDougall noted that they would be keeping an eye on those crosswalks and see if anything changes. For Vickerson, education is a “good first step.” “I’m really happy about that sort of thing,” he said. “We’re kind of collaborating, a little bit.” However, he hopes education is the beginning, rather than the end of the discourse. In April, Vickerson told SaltWire he planned on attending a council meeting to voice his desire for a crossing guard in person, and as of May 6, that plan has not changed. “I would like to read a letter to council in regards to some things that we can do,” he said. Such things, said Vickerson, could include conducting a survey with the children at school, or seeing how many children live on the other side of the road that would use that crosswalk. “We only need one crossing guard,” he said. “In the past, they’ve had three.”