Woman dies after being transported from Charlottetown residence to QEH 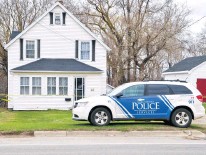 CHARLOTTETOWN – Police are investigating the death of a Charlottetown woman after being called to a house on St. Peters Road late in the evening on May 5. In a May 6 release, Charlottetown Police Services said officers were investigating what they are calling a suspicious death. Charlottetown police chief Brad MacConnell said police received a call of a woman in distress at a residence on St. Peters Road shortly before 8 p.m. When police arrived, a woman was found in medical distress and was transported to Queen Elizabeth Hospital, said MacConnell. The woman later died at the hospital, he said. In an interview with SaltWire Network later in the day on May 6, MacConnell said a person is in custody for questioning; however, no charges have been laid as of yet, and the death remains classed as suspicious. Police were still on scene at the house on May 6. MacConnell said the investigation has been handed over to the police's major crimes unit and the forensic unit. The body of the deceased was transported to Dartmouth, N.S., for an autopsy, though MacConnell said those results might not be immediately available. “Typically, it takes some time for results to be reported on those … that could be days or even weeks sometimes,” he said. MacConnell said the investigation is ongoing, and police are still interviewing those who might have information. “We still have a lot to learn about what happened here yesterday. We will be looking at those autopsy results but also the results of our investigation on the ground here,” he said.