P.E.I. couple to celebrate the 10th anniversary they thought MS would deny them 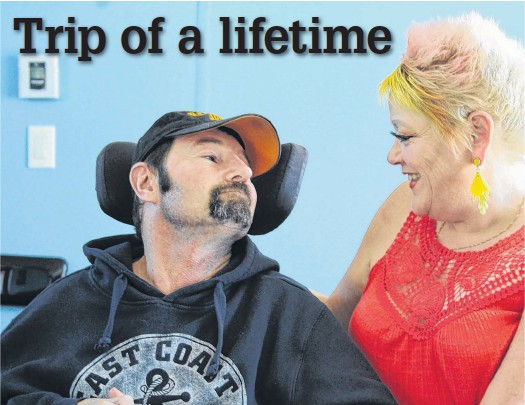 SOUTHWEST LOT 16, P.E.I. – In May 2019, Kevin Baglole’s doctors told him that his secondary progressive multiple sclerosis (MS) had advanced to the point that there was nothing they could do except give him palliative care to ease his symptoms. His birthday in August was expected to be his last. His wife, Kim Baglole, was unsure if he would live long enough to see that Christmas. “He’s just gotten sicker and sicker and sicker,” said Kim. In May 2022, though, three years after his prognosis, Kim has watched her husband’s condition improve. On Oct. 6, the couple will celebrate their 10-year anniversary – a day neither believed they would get to see. Kim intends on making it a day they will never forget – a four-day trip to the Magdalen Islands, where both have always wanted to go but have never been. “We’ve been planning on it (for) a couple (of) years, but it’s not been possible,” said Kim. “This is the first year he’s agreed to travel anywhere.” A DIFFICULT JOURNEY Kevin began experiencing his MS symptoms in early 2007, shortly after he began dating Kim. “My legs were really weak,” said Kevin, who recalls how he had been off balance. He was working out west at the time and got sent back to P.E.I. after coworkers noticed he had difficulties operating workplace machinery. “My blood tests came back regular,” he said. “They said ‘okay, what the hell is wrong?’” He had an MRI in March, and in April, his doctor diagnosed him with MS. MS is a disease that attacks the central nervous system and disrupts nerve impulses from the system to the rest of the body. It results in a wide range of symptoms, which usually includes a loss of mobility. There is no known cure. Kevin said hearing the diagnosis felt strange, but it was a kind of relief to know what was happening to him. “I didn’t know anything about MS,” he said. “I figured I’d take a needle, a shot, and I’ll be good.” In 2014, Kim and Kevin had just begun renovating their house for more accessibility and adjusting to life with worsening MS systems, when they lost their home in a fire. Shortly after, Kevin required a wheelchair to get around. It was bound to happen eventually, said Kim, but the stress of living in three different hotels impacted Kevin’s condition. “Trying to figure out how to live with MS as it progresses is hard enough,” said Kim. “Every day was change and more limiting … Now we’re trying to figure out all this as it’s happening quicker, in stranger environments.” His condition took a turn for the worse in early 2019. He had an MS attack and was taken to the hospital. “I had never seen so many people gathered in a room,” said Kim, noting the 11 medical professionals alongside herself and his close family. That day, she and Kevin learned that his lungs were working at 30 per cent capacity, his chest muscles were working at 20 per cent and he was on a BiPAP machine to help his breathing. “I was literally scared to close my eyes at night,” said Kim. “I felt that I was going to wake up with him cold next to me in the morning.” Although both were troubled by his prognosis, they refused to let it bother them and disrupt their lives completely. “(I took it) good, I think,” said Kevin, who was adamant that he would not die in the hospital. “But I was really like ‘wow, that’s a lot.’” ROAD TO RECOVERY After hearing that he would likely not live to see 2020, Kevin was largely resigned to his fate – even after living longer than doctors expected. “He was waiting for himself to die,” said Kim. “He kept saying, ‘I’m just a waste of skin.’ That’s how he felt.” In 2020, though, his mood began shifting; in June, he began physiotherapy. Then in November, Kim woke one night to find her husband sitting in his wheelchair, the footplates thrown back. “He said, ‘I honestly feel like I could stand up, Kim,’” said Kim. She helped her husband stand. That night was the first time in a long time they felt hope for the future. At the beginning of 2022, Kevin grew determined to exercise every day, in addition to his physiotherapy. Kevin credits his wife as being his biggest motivator – but he also bought a new fourwheeler with the goal of being able to take it for a ride. ‘PUSH BACK HARDER’ In early May, Kim began planning their trip to the Magdalen Islands to celebrate their 10year anniversary. While both are excited for the trip, Kim has had trouble finding a wheelchair-accessible hotel – even though both are hoping Kevin will be able to walk by then. The only option she had found, as of speaking to SaltWire Network, is a suite that is currently out of their price range. “It feels like typical MS,” said Kim. “You get excited about one thing and MS just knocks it down one time after another.” Despite the unexpected hurdle, the couple remains optimistic that plans will work out in the end. “MS pushes,” Kim says, and Kevin finishes the quote: “we push back harder.” Challenges relating to the trip, for them, are just one more difficulty the pair will find a way to overcome. “We’re going to figure out how to push back harder,” said Kim. “We’re going to get to the Magdalens. It’s going to be amazing.”