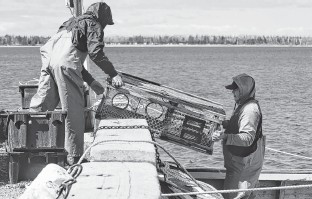 LENNOX ISLAND, P.E.I. — When Chief Darlene Bernard tells her grandchildren about this day, she’s going to say it was about taking action to exercise their people’s rights. Lennox Island First Nation launched its moderate livelihood — or treaty — fishery on May 7 without authorization from Fisheries and Oceans Canada (DFO). While there was no conflict with DFO or commercial fishers on May 7, the fishery opened with about one quarter of the total planned traps because their hauler thought he may lose his job if he participated, Bernard said. “We did have some issues with trying to launch our larger boats, and it was that the boat hauler wasn’t comfortable to launch our boats because there were suggestions that, if he did, he wouldn’t launch another non-Indigenous boat.” LAUNCH SaltWire called the P.E.I. branch of DFO to ask about this and their overall stance on the fishery, but did not receive a call back by deadline. Lennox Island’s treaty fishery will eventually set 1,000 traps, but only 240 went out on May 7 on two separate boats with a total of four crew. Another 300 more will be going later this week, Bernard said. Along with the hauler issue, the timing of the fishery announcement at the end of April may have kept some fishers off the water, she added. “We did let the community know and it was quite late, so some of the fishers who were interested were not prepared,” she said. “But they will launch later in the week.” Bernard has met with the P.E.I. Fishermen’s Association, but she also noted the First Nation is not obligated to negotiate with them. Lennox Island deals with the federal government on a nation to nation basis, she said. The band also does not have to fish within the season, but they are going to, Bernard said, adding they also will not fish on Sundays or Wednesdays for conservation purposes. No one from the two fishing boats was available for an interview as they were busy preparing buoys and lobster traps when they briefly returned to harbour. HOPE Elder Methilda KnockwoodSnache was at the docks on the morning of May 7 where she helped lead a ceremony and send the fishers on their way. “We should be thankful for this wonderful blue planet… especially this island which is surrounded by water,” she said. “It is a protection.” Knockwood-Snache is hopeful things are turning around for her community, she said in an interview after the ceremony. “We’re being allowed to go do our traditional fishing and practice our treaty rights, and (I hope) that no one interferes with that.” Knockwood-Snache mentioned the conflicts in Nova Scotia after First Nations bands in that province set up moderate livelihood fisheries in 2020. “I just didn’t like how the fishermen were upset with the Native people because they were going out to do their traditional fishing,” she said. “I just hope that doesn’t happen here, on this little island.” Island Mi’kmaq and non-Indigenous people have a good relationship, though, so Knockwood-Snache doesn’t expect any issues, she said. “Ignorance has got a lot to do with why that happened in Nova Scotia.” After the ceremony, three RCMP cruisers arrived around 8 a.m., and one officer briefly spoke with a member of the Lennox Island Coast Guard before all three left. DETAILS Kristin Lewis, fisheries operations manager for Lennox Island, explained some of the details of how the fishery will work. There is an application and licensing process for the fishery, and all traps are tagged with a treaty fishery tag. The fishery will cap out at 1,000 traps, as recommended by the community. Fishers own their own traps and understand they are taking the risk of losing them if DFO cracks down, Lewis said. “It would be up to the fishermen to purchase more gear.” And this could happen, she said. “I haven’t heard anything (today),” Lewis said. “We met with (DFO) last week and they just told us that we may be subject to enforcement.” When asked her final thoughts on the launch, Bernard said it marked the dawning of a new age. “It’s a beautiful day and I think that it’s a historical day.”