Hi Sky Friends, It has been quite a while since we discussed an individual star, so I thought we could tackle Algol. Algol was frequently called the Demon Star by earlier peoples. Let us discuss why. Algol is a binary star, or two stars that are gravitationally bound to each other, just as the moon is bound to us and we are bound to the sun. Note that two bodies attract each other so that we are actually bound to the moon, and the sun is bound to us. When two objects are gravitationally bound to each other, the appearance is that the smaller body orbits, or goes around, the larger just as the moon does with us. There are many binary stars in the night sky, but mostly they orbit not in a plane with us as the moon does when there is an eclipse. It is the same way with Algol. It changes in brightness, or winks, completing a visible dimming and brightening cycle in two days, 20 hours, 49 minutes, and you can watch this. The change from dimmest to brightest is about three times. We call Algol an eclipsing binary star. Now how do we view Algol? It is not too hard, really. Let us start with a familiar form – the Big Dipper. Start at the first star in the handle of the Dipper – the one nearest to the pot. Draw a line through to Polaris, the North Star and go an equal distance again. You should arrive at a 'W' shape. This is Cassiopeia, the Queen. The inner portion of Cassiopeia points down to Perseus, which I euphemistically call a chair. From Cassiopeia, you arrive at the upright back of the chair. As you descend the back of the chair, the 'seat' goes to the left. To the right, there are two 'legs' going downwards. Take the rightmost leg; at the bottom are two stars of unequal brightness. The brighter is Algol. If you can find it, maybe you will get a wink from Algol, but it will last for a while, however, as the dimmer star passes in front of the other! So, what is in our December sky at night? I usually begin this phase of the article by discussing the planets, but I will digress because December may – I repeat may – turn out to be a little special. We may have the opportunity to view a naked eye comet – if it becomes naked eye. However, at least, you should be able to see it clearly with binoculars. It may even have a tail. I am hoping for the best. So, where and when to look. Firstly, its name is Comet C/2020F3, or, more commonly, Comet Leonard. The comet should begin to be visible to the unaided eye – if it does – by the second week of December. Then, it will rapidly fade to a so-so binocular object by month’s end. The peak should be about Dec. 14. Before Dec. 12, look in the southeast at dawn. After the 12th, look in the early evening low in the southwest. Because of its position, you should be at a place where you can see the horizon. Darkness, away from lights, helps. We can’t get the chance often, so try not to miss it. Next, we will discuss the Geminid meteor shower. This rates as one of the three best meteor showers of the year. Unfortunately, it’s in December, so it’s likely cold. This year the moon is heading towards the full moon. (Dec. 18) and so until it sets it will interfere with viewing. But if you are keen, it will set about four hours before sunrise. After that, it should be very good if the sky is clear. You might see more than 100 per hour from a dark site, and they can be majestic. Now, our nightly planets. Jupiter, Saturn, and Venus are all visible in the south to southwest all month long. Venus is the brightest (quite bright) and clearly in the southwest. It is the lowest of the three. Jupiter is at the top left of the three and is the second brightest. It is about southsouthwest. Saturn is the faintest. It is almost halfway between the other two. All three planets are descending closer to the sunset as the month passes, especially later in the month. Therefore, it is better to view them relatively soon after dark. Mars is the only morning planet this month. Look for it low in the East Southeast to Southeast. It rises about two hours before the sun. It is dim. New Moon-Dec. 4 Full Moon-Dec. 18 Winter Solstice-Dec. 21 See you next month. Your Sky Guy, Dr. Rolly Chiasson 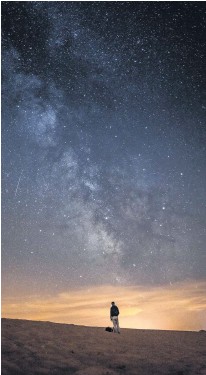