SUMMERSIDE, P.E.I. - Each year, Sue Gallant says she finds herself overwhelmed by the weight of community support shown during the Kin Family Christmas Appeal. "It's remarkable," said Gallant. "That's the only word I can use, remarkable." Yearly, Gallant sees the generosity of the Summerside community in full force. Most recently, during the 2020 Kin Family Christmas hamper effort, the service group consisting of Kinsmen and Kinettes ran low on turkeys, creating a difficult situation. "We didn't know what to do," Gallant said. Members made a public call for help on social media and volunteer group P.E.I. Cupcakes came to the rescue with a $900 donation. It wasn't long before others came out to help too. "I had people showing up with turkeys left, right and centre," said Gallant. "It was so overwhelming, it was unbelievable. It's wonderful to see if you're ever stuck how the community steps in." 72ND CHRISTMAS APPEAL Co-chairs Gallant, Ray McCourt and Eric Ferrish have been helping to organize the televised fundraising event since the early 1990s for the Kin Family. This year's Appeal will mark the 72nd year supporting the Kin Family's Christmas hamper program, which helps families and seniors in need. The hampers include supplies for Christmas dinner, enough food for families for close to a week, and gifts. Gallant said she has also noticed more people choosing to sponsor a family through the Appeal effort this year. Those sponsoring a family are given a list of children's age, clothing size, wants and needs for gifts donations, while the Kin Family provides the Christmas hamper filled with food and other supplies. Sponsoring a family makes a substantial contribution to the effort, Gallant said. "The more families that (people) can sponsor, it makes it easier for us," she noted. A CONSIDERABLE NEED In 2020, the Kin Family distributed more than 225 hampers to families, and members are expecting similar or higher numbers this year. "This year we're seeing a lot. There's a lot of need this year," said Gallant. "With COVID, it's really made a difference in people's lives ... it's tough." The price to put together each hamper goes up each year, too, Gallant noted. It costs roughly $250 to $300 to fill the hampers. "But we have success each year," said Gallant. "And people are so appreciative when you drop it off." Gallant, McCourt and Ferrish begin organizing the appeal in early September each year. The three have the planning effort down to a science at this point, but it still takes a tremendous effort from the co-chairs and some 75 volunteers who help out in one way or another. However, McCourt said the effort is well worth the reward in the end. "It's pretty heartwarming at the end of the day that you've made somebody's Christmas a little bit better," said McCourt. "You're crying when you go out the door to know you've made their life a little bit better." But the job would be impossible without help from the outside community. "We've just got to thank the citizens of the city of Summerside," said McCourt. The 72nd Kin Family Christmas Appeal will be televised on Dec. 6 from 7 to 10 p.m. on Eastlink Community TV Channels 10 and HD 610. Anyone wanting to pledge can call toll-free at 1-888666-3543. Additionally, the group will be hosting an online fundraising auction to support the effort, which will be shared on Facebook. 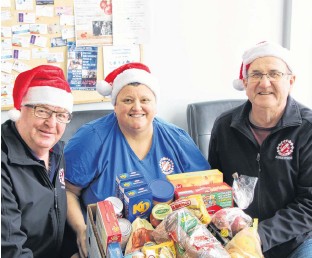