SUMMERSIDE – The roar of engines. The oily scent machinery. Nerves. Elation. Adrenaline. Todd Sharp’s first flight in a de Havilland CC-115 Buffalo was an intense experience. He was just a St. Eleanors boy then, taking his first tentative steps into the sky. But his journey didn’t end there. Sharp spent 34 years in the Royal Canadian Air Force, retired as a lieutenant-colonel and is now a civilian adviser to NATO in Brussels. “That experience kindled my love of aviation,” he recalled. He never forgot that first flight or lost his fondness for the humble CC-115 Buffalo. Which is why, when the opportunity presented itself, he instigated a push to install a decommissioned Buffalo at Slemon Park’s Air Force Heritage Park. “During a visit home to Summerside, I recall driving by the Air Force Heritage Park … and noting to myself that despite search and rescue (SAR) being an integral part of CFB Summerside’s history, there were no SAR aircraft on display. I also knew from personal experience that the Buffalo fleet was being retired, so I did a little research,” said Sharp. It took about 18 months and a concerted effort by Sharp, some friends and former colleagues, local MPs and MLAs, the City of Summerside, the heritage park’s stewards and Slemon Park Corporation, but a Buffalo now sits proudly in the park. The property is just off the main Route 2 entrance to Slemon Park. Though the plane touched down here in September, it wasn’t officially unveiled until a special ceremony on Monday, Nov. 15. Search and rescue technicians and former aviators of all stripes travelled from across the Maritimes for the event. One of them, though he didn’t have to travel far as he lives here, was retired Col. Dennis Hopping. Hopping is a former commanding officer of CFB Summerside, where 413 Transport and Rescue Squadron was stationed. It flew Buffalos here from 1970 right up to the base’s closure in 1991. It was an incredible event to welcome all those old friends, said Hopping. It brought back a lot of memories, many of them related to the fondness and respect they all felt for this aircraft. “I’m awfully pleased we were able to get a Buffalo; it was kind of the last missing piece (to that park),” said Hopping. “It’s like a beacon. You can see it from the highway and it’s just a natural drawing card, that big yellow detail standing up there. It’s pretty significant.” Hopefully, locals and visitors alike will enjoy this edition to the heritage park for a long time to come, added Capt. James Harper, of Kensington. Harper and Sharp are old friends. The former did a lot of the local groundwork to help secure the Buffalo and was Sharp’s first phone call when he originally floated the idea. The men have known each other from their air cadet days and worked closely together to secure the Buffalo. “It was something I wanted to get behind. I’ve been hanging around that airport since 1983,” said Harper, now officer commanding of the P.E.I. Cadet Flying Program. “To see that (plane) sitting on that concrete pad, after hundreds of emails and phone calls, it gives you a nice feeling of satisfaction.” So far, Sharp has only been able to see pictures of the Buffalo in its new home. But he relishes every photo he’s seen. “When we received the word that the request had been approved, I could not have been more pleased, and I was proud that one of these iconic aircraft had finally made its way home to Summerside,” said Sharp. He’s hopeful he’ll be able to make it home for a visit next summer, see it in person and maybe reflect on that first foray into the sky that leads to so much more. 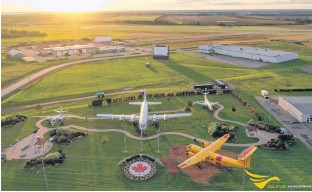 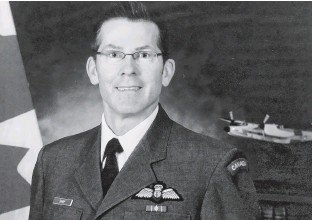