SUMMERSIDE — In mid-May, Lyle Stewart stopped at Dino’s Pizza in Summerside to buy $100 worth of suspended slices for people in need. Two months later, when owner Rami Ayoub checked the mail, he was surprised to find not one but two envelopes of cash. The letters were from people who saw media coverage of Stewart’s story and were inspired to follow suit and also purchase suspended slices. “I was definitely happy about it,” said Ayoub. “It just seems like every time something like that happens and it goes viral on social media, other people are encouraged to do the same.” In May, Stewart told SaltWire Network he “grew up ... from nothing.” He’s been helped in his past — now, with things beginning to look up, he wanted to do his part to pay it forward. “I know there’s a lot of homeless people who are going hungry these days,” Stewart told SaltWire Network in May. The initial donation was surprising enough to Ayoub — the money through the mail was even more unexpected. “The coincidence to get two at the same time was just kind of nice,” he said. “I came in and I told my staff ... They thought I was making it up for a second.” What’s more surprising is where the two letters came from — from someone in Iqaluit and from a Torontonian currently working in the United States. In the letter sent alongside the cash, the Torontonian said he’d “never been to P.E.I. but hope(s) to visit one day.” Both letters credit Stewart as their inspiration for buying the suspended slices, noting that they wanted to do their own parts to pay it forward, one slice at a time. One of the letters contained $40, the other held another $100 — enough to buy 35 suspended slices, said Ayoub. “It’s nice to reach people like a thousand miles away,” said Ayoub. “They actually took the time of day to handwrite a letter. You don’t see that too often.” 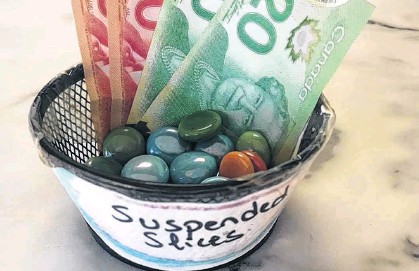