5SUMMERSIDE — A local dog rescue is looking to help more pups in need. Dan Cantin, who runs Summerside-based Gibson’s Legacy, hopes that registering as a non-profit will help him achieve that goal. Even before starting Gibson’s Legacy, Cantin was involved with dog rescues for years. In 2015, he ran a small group, Charlottetown Rescue, with his friends. It eventually became overwhelming, and Cantin had to step down. “I had way more than I could do alone,” he said. Helping dogs in need, though, was not something Cantin could easily leave behind. “I’ve always been known for doing rescues,” he said. “Dogs have always continued to show up to the door needing some help.” In the summer of 2020, he started rescuing again. This time, he named the group after his pit bull mix, Gibson, who had died of lymphoma. “He lit the passion for rescue.” Gibson was found dumped on someone’s lawn, starving and with burn marks on his skin. After getting veterinary care, he needed a new home. Cantin said he had “no business looking for a dog” at the time, but upon meeting Gibson and seeing how sad and friendly he was, leaped at the opportunity. For Cantin, helping out other dogs in Gibson’s memory was the least he could do. RESCUE AND REHABILITATION Currently, Cantin runs Gibson’s Legacy out of his apartment. He places dogs with foster families when he can, depending on the dogs’ needs; it’s not uncommon for a dog to stay with Cantin in his apartment, though. With the rescue, Cantin tends to focus on rehabilitating dogs with behavioural issues. These dogs, he said, might struggle to be adopted from a shelter; he wants to do his part to rehabilitate them and give them a fighting chance at a good life. “I make sure that I live with them, train them, put them on a better path than they were when they came to me,” he said. He’s dealt with personal surrenders, as well as partnered with other rescues and shelters, like the Fredericton SPCA. At a certain point, it can be hard for shelters to train dogs with behaviour issues, said Annette James, director of operations with the Fredericton SPCA. James said that one-on-one training in a home environment, like what Cantin provides, can help yield better results. “We get them as far as we can get them,” said James. “And then, when we run into these really hard cases, Dan is just very good at being able to help turn that around.” ACHIEVING GOALS Since starting up, Gibson’s Legacy has largely relied on donations to stay in operation. Registering as a non-profit organization would help open the door for funding, according to volunteer Brooke Miller. “There should be a resource to help those dogs be cared for locally,” said Miller. “That’s what we’re hoping, that we’ll continue to be part of a community where we are a resource to the Island’s needs for helping dogs.” They would also like to grow the rescue, bringing in more volunteers, helping out more dogs and getting a larger facility specifically for the rescue. “It’d be nice to level up,” she added. “It doesn’t have to be big and fancy, but there are certain things that are limited in half a house.” As of mid-July, they had raised more than $500 in donations, and Miller said she’s amazed by the support. “It’s more than you could ever ask for, and we just want to keep it growing.” Cantin also is looking forward to the day Gibson’s Legacy is an official non-profit organization. Rescuing dogs is something he loves doing, and wants to be able to help more animals in need. “It’s life-changing,” said Cantin. “You’ll lose your mind, but you’ll find your heart, that’s for sure.” 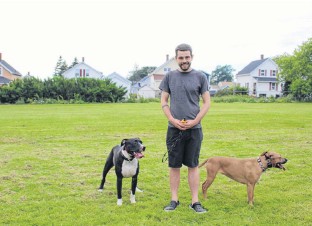