KENSINGTON — Kensington Town Council had a change of heart recently after initially deciding not to donate to a local refugee sponsorship group. The Kensington and Area Refugee Sponsorship Initiative (KARSI) is raising money to bring a second refugee family to P.E.I., and recently submitted a letter to the town seeking support. KARSI’s first project successfully brought a family of four to P.E.I. in 2018. Council discussed the letter at a recent committee meeting, but councillors wanted more time to reflect on the request, said Mayor Rowan Caseley. Council discussed the topic again during its regular monthly meeting on July 12. Caseley asked council members for their thoughts and Coun. Ivan Gallant was the first to speak. Gallant said he has given it some thought and feels KARSI is doing good work. “Some people may be in favour of it, and there may be people not (in favour),” said Gallant. “In my opinion, we should leave it to the committee to solicit businesses and the residents individually.” Coun. Jeff Spencer offered a different perspective. Spencer said he was thinking of making a motion for a $2,000 donation. “The committee is doing this work to bring this family who has struggled their whole life for a chance at a better life,” said Spencer. Before Spencer made the motion, Caseley asked if the council had any other thoughts. Coun. Rodney Mann inquired what the town did the first time the committee brought a family to Prince Edward Island. Caseley said there was no financial request at that time, but he believes the town donated items for fundraising. Spencer made a motion that the town donates $2,000. The resolution died on the floor when there was no seconder. Caseley asked if there was any willingness by the council to donate a smaller amount. There were no replies. The meeting continued with the council addressing additional correspondents, which included voting unanimously to donate $250 to the Malpeque Bay Credit Union back-to-school fundraising initiative. A request came from the Kensington and Area Chamber of Commerce seeking support for its annual golf tournament at Andersons Creek in Stanley Bridge on Sept. 14. Mann made a resolution that the town sponsors a team for the $500 entry fee. The vote was 4-1 as Deputy Mayor Coreen Pickering was absent from the meeting. Councillors Mann, Gallant, Wade Toombs and Bonnie MacRae voted in favour. Spencer voted against and offered an emotional explanation. “Every year I have voted in favour of that,” said Spencer. “But if we are going to give $500 to play golf and we can’t give anything to someone who has lived in a refugee camp their entire life and their one chance to get out of that life into Canada ... I can’t support it.” Caseley said he certainly understands Spencer’s perspective. At the end of the meeting, Caseley told council he was bringing the KARSI request back to the table because of Spencer’s passionate response. “Are we sure we don’t want to do anything in supporting KARSI?” said Caseley. After a brief pause, Caseley told the council he understands they didn’t want to go for $2,000 but asked if there was any willingness to consider a donation at all. “I hear what Coun. Spencer is saying, and I happen to agree with him,” said Caseley. MacRae put a motion on the floor for the town to donate $1,000. Spencer seconded it, and the motion passed unanimously with no further discussion. “I think it’s a very, very good cause,” said Spencer. “This will change lives.” 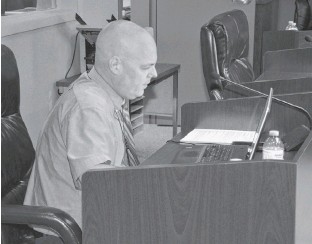