SUMMERSIDE — After spending the last several years wanting to renovate the Harbourfront Theatre, Dan Kutcher, president of the board of directors for the theatre, is thrilled that the project has finally gotten off the ground. “We’re really excited by what this will mean for patrons, what it’ll mean for the community, the economic benefits,” said Kucher. Kutcher attended a press conference July 19 where Egmont MP Bobby Morrissey announced $765,000 in federal funding for the renovations. The money comes from two funding partners: the Atlantic Canada Opportunities Agency and the Department of Canadian Heritage. “This facility serves all of us,” said Morrissey at the press conference. “I’m looking forward to seeing what it is when it’s all brought together.” Facilities like the Harbourfront Theatre, as well as the Credit Union Place and the College of Piping, Morrissey said, play a large role in bringing people to Summerside to live. According to Kieran Keller, executive director of the Harbourfront Theatre, the renovations will cost around $850,000 in total. The theatre is contributing 10 per cent. The funding announcement came shortly after the theatre celebrated its 25th anniversary on July 10. “It feels appropriate,” said Kutcher. “It’s the right time.” A LONG TIME COMING Although renovations had been planned for awhile, ongoing shows year round prevented them from starting the work. When the pandemic paused in-person activities like plays and other performances, though, they realized they could use the downtime to breathe new life into the theatre. Renovations began in early June; Keller said he expects the work to be complete by September, just in time for the theatre to reopen and the show to go on. Upgrades to the Harbourfront Theatre include both interior and exterior work. The auditorium’s walls and ceiling have been painted black. Previously, the ceiling was white; the walls were beige and red. New carpet was also installed, as well as new lighting along the seats. The canteen is also being repurposed into a bar. Kutcher sees it as a place for people to gather during intermission with a glass of wine or beer. “When you go to the theatre, it’s an event. It’s a night out,” said Kutcher. “Leave the kids at home and go with your husband or wife or partner. Go for dinner, walk around the boardwalk, enjoy the evening and go see a show.” Although they are looking forward to the day renovations are done, Kutcher and Keller are even more excited for when shows return to the Harbourfront Theatre. First and foremost, said Kutcher, theatres are a “place of human contact,” where people can see their friends and neighbours and share an experience. “We’re just really looking forward to that day when we can celebrate our 25th anniversary the right way,” said Keller. 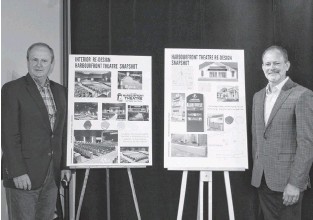