PORT HILL —The Yeo House at Green Park is coming alive this summer — though, according to legend, perhaps it's always been that way. “The stories of it from the staff go back as long as there’s been staff,” said site manager Caitlyn Paxson. Doors have supposedly swung open with no hand touching the knob. Footsteps have allegedly been heard in the upstairs hallway when nobody was walking about. Staff and visitors alike have heard deep inhales and screams but, when they turn around, no one is there. These inexplicable events have occurred often enough to make people wonder if the spirits of shipbuilder James Yeo and his family still lurked in the rooms and corridors. “Is it the literal ghosts of dead people?” said Paxson. “I don’t know, but there’s definitely something strange that happens in that house that affects the people who are in it.” Staff at Green Park Shipbuilding Museum and Historic Yeo House have always given tours on the history of the park and the artifacts in the house. This year, though, Paxson wanted to shake things up and Yeo House will be offering ghost tours until the end of August. It’s her first summer at Green Park but already, Paxson has heard countless stories from staff regarding odd energy in and near the Victorian-era building. “It’s something that happens with old homes, especially homes that have been preserved,” she said. “They just tend to be repositories for people having those experiences.” With the ghost tours, visitors will hear about the Yeo family and the customs of the Victorian era — but they’ll also learn all about the spirits that seem to walk the halls of their old home. CREEPY OBJECTS Perhaps the most infamous object supposedly haunting the Yeo House is Wheelie: a small toy dog on wheels that was found inside the walls during renovations. The floor of the children’s room in which Wheelie is kept isn’t noticeably uneven. Still, on numerous occasions, Paxson said staff have placed Wheelie in one spot only to return later and find it had moved on its own. Last summer, the P.E.I. Museum and Heritage Foundation submitted Wheelie as an entry in Yorkshire Museum’s Twitter contest for “creepiest objects.” Wheelie’s tweet created a buzz — part of what inspired the P.E.I. Museum and Heritage Foundation to start up the ghost tours. “The foundation thought, ‘oh, people seem interested in this material,’” said Paxson. “We should find a way to showcase it at Green Park.” Although she crafted the story told on the tour, when it comes to the paranormal, Paxson considers herself a skeptic. That said, she needed other staff to listen to her practise the script; she was starting to get creeped out, rehearsing it by herself upstairs in the Yeo House. “I always say that I don’t believe in ghosts until I’m alone in a historic house." HAUNTED OR NOT Although Paxson had enough knowledge of Yeo family history and heard enough paranormal anecdotes to weave a chilling narrative for the tour, she wanted an outside opinion to inform her script. That’s why, in late June, she asked Julie Pellissier-Lush and her cousin Sheri Bernard with Mi’kmaq Paranormal to walk through the house and examine it for themselves. Pellissier-Lush and Bernard had visited Green Park before, in the fall of 2020. Even then, Pellissier-Lush said she could sense the energy on the grounds. “I don’t think my cousin and I were able to walk too close to the house because of this energy that was outside,” she said. When the two returned to investigate the house’s interior, Pellissier-Lush sensing energy and Bernard with her ghost box (a modified radio used to hunt spirits), their findings seemed to confirm the staff’s hunches. “Sometimes (the energy) was really strong, where the hairs on the back of your neck stood up,” said Pellissier-Lush. “Other times ... the room just felt a little bit colder than the other room.” As for Wheelie, PellissierLush believes that staff are correct in thinking there’s something more to that old toy dog. She couldn’t say if the energy she felt came from the dog itself, or from a child pushing it, but plans on returning to continue the investigation. WHO’S HAUNTING? Even though it’s been long theorized that something spooky is afoot at the Yeo House, when Paxson asked, nobody dared guess which Yeo family member was doing the brunt of the haunting. “It almost felt like everyone was afraid to speculate who it could be,” she said. Paxson said, though, that there’s no one obvious event or story that jumps out as a probable cause for the house’s strange happenings. Instead, Paxson has turned to several historical figures and weaved her tale from multiple anecdotes. The story of the maidservant, hiding her pregnancy, stopping to catch her breath at the top of the stairs to explain the gasping sound in the hallway. The story of James Yeo’s pain to explain the “dark energy” often felt in his bedroom. And, as the tours go on, Paxson imagines more tales will surface to help explain some still-unknown phenomena. “I’m hoping that more people who have stories in the family that have been passed down ... will share them with us,” said Paxson. “Maybe we’ll get some answers.” 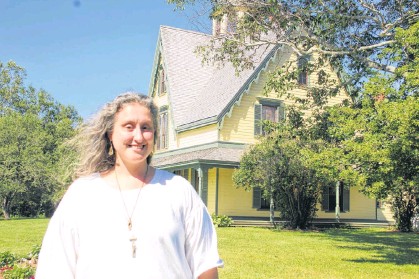 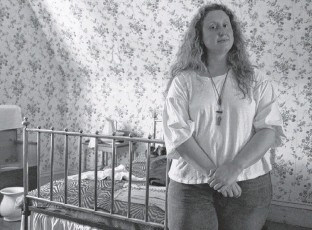