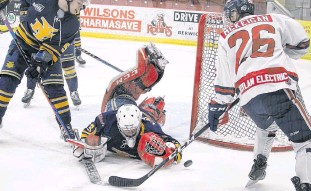 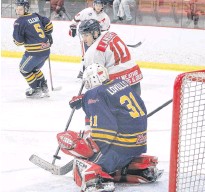 The Valley Wildcats dropped a pair of recent games against division opponents. They lost 3-2 to the Pictou County Weeks Crushers Nov. 17 in New Glasgow before dropping a 5-1 decision to the Yarmouth Mariners Nov. 18 at the Kings Mutual Century Centre in Berwick. It leaves the team in third place in the Maritime Junior Hockey League's Eastlink South Division with a 8-8-2-1 and searching for consistency. Valley started the season 6-1-1-1 before going 0-5-1-0 in their next six games. They then won back-to-back games and dropped a pair. The Wildcats hosted the Truro Bearcats Nov. 23 in a makeup game. Results were unavailable at press time. The Grand Falls Rapids come to town Friday, Nov. 25, for a 7 p.m. game before the Crushers visit Sunday, Nov. 27, at 3 p.m. Here’s a look at the previous two games. MARINERS 5 WILDCATS 1 Jerome Gilbert had two goals and an assist while captain Ben Roode chipped in three helpers in the Mariners win. Kieran Burke, Reid Vos and Ryan Semple also scored. Tamy Ettaqi and Michael Marquez each chipped in two assists while singles went to Tyler Lee and Jerome Nadeau. Aidan MacLeod from Ben Nicholson and Cole McKeigan replied for the home side in front of 353 fans in Berwick. Joey Lovullo made 26 saves for the win while Justin Bourque stopped 33 shots in the loss. The game was tied 1-1 after the first period while the visitors took a 4-1 lead to the third. Yarmouth went 2-for-4 on the power play and killed all seven of Valley’s opportunities with the man advantage. CRUSHERS 3 WILDCATS 2 Bryson Boudreau scored twice, including the winner, as the Crushers defeated the Wildcats. Jake Edwards also scored in the victory in front of 812 fans while Neil MacLean and Carter Murchison had the only assists. Josh Crooks and Ethan Landry scored for the visitors. Brendan MacRitchie had two assists while Augie Ashley and Crooks each chipped in one. Kenzie MacPhail made 17 saves for the victory while Evan Martin stopped 31 shots in the loss. Valley led 2-1 after the first period while the game was tied 2-2 heading to the third. Both teams were 0-for-2 on the power play.