Canada at forefront of fight for freedom

ANITA ANAND GUEST OPINION Anita Anand is Canada’s minister of National Defence. She was born and grew up in Kentville. 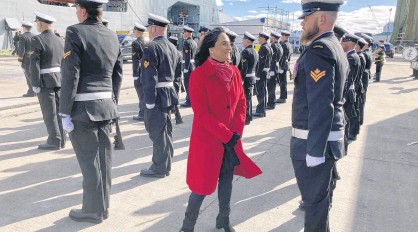 Last weekend, more than 300 political, military, and industry leaders from around the world converged on Halifax for the 14th Halifax International Security Forum. Every year, the forum brings together an impressive list of global leaders to discuss pressing security and defence challenges. As a Nova Scotian myself, it is fantastic to see so many people from around the world experiencing everything that this great province has to offer. It is fitting that a security conference of this scale takes place in Canada. Hosting nations from around the world to find solutions to common challenges is exactly the kind of role that Canada has played throughout our history, and one we will continue to play into the future. This year, our conversations took on new urgency because the world is growing darker. Russia’s invasion of Ukraine is an attack on the principles and values that have underscored global peace and security for more than 80 years — democracy, freedom and the rule of law. China is also an increasingly disruptive global power, while Iran is targeting its own citizens. State-backed and non-state actors are seeking to disrupt our lives with cyber-attacks and disinformation campaigns. And climate change is wreaking havoc at home and abroad. With so many pressures facing the international community, liberal democracies like Canada have a choice. Do we let authoritarian regimes return us to the era where might makes right? Or do we work together to preserve the longest stretch of progress our world has ever known? Canada stands firmly with our allies on the side of democracy, multilateralism, and the rules-based international order. We are demonstrating this in our unwavering support for Ukraine. Since Russia’s brutal invasion began, Canada has committed more than $1 billion in military assistance to Ukraine. That includes M777 howitzers, ammunition, anti-tank weapons, high-resolution drone cameras and armoured combat support vehicles built right here in Canada. Last month, I also announced that Canada will provide more than 500,000 pieces of winter clothing, in direct response to a request by the Ukrainian government. We are moving quickly, and have already signed contracts with Canadian industry to provide winter combat boots, parkas, gloves, thermal layers, balaclavas, and more. Those deliveries have already begun. Canada has stepped up to support Ukraine in other ways as well — from transporting over five million pounds of aid to sharing intelligence and countering Russian disinformation to training more than 34,000 Ukrainian military personnel since 2015. Supporting Ukraine isn’t the only example of Canadian leadership. In June, I unveiled Canada’s plan to invest $38.6 billion over 20 years to modernize our North American Aerospace Defence Command (Norad) capabilities. This marks the most significant upgrade to Canada’s Norad capabilities in nearly four decades. Canada cannot simply rely on its geographical location to keep us safe. New technologies like advanced cruise missiles are creating new threats across North America, including the Arctic. We have already begun working with U.S. partners to strengthen our integrated surveillance and decision-making capabilities. We are refining plans for a cutting-edge network of over-the-horizon radar systems in both countries that will detect threats at longer ranges — including over the Arctic. And we are looking at how we can upgrade our military infrastructure to extend the range and capacity of Norad’s defences. Modernizing Canada’s Norad capabilities is a significant undertaking and at every step, we will be working with our U.S partners, with northern communities, and Indigenous Peoples across Canada. Whether it is in Ukraine, in North America or elsewhere, Canada aims to take a leadership role. On Nov. 18, I announced that Canada has proposed the Halifax Regional Municipality as the location for the North American regional office of DIANA — NATO’s new Defence Innovation Accelerator for the North Atlantic. DIANA is a groundbreaking initiative that will bring together innovators, tech companies, academics and researchers from NATO countries to explore how technology can solve critical defence and security challenges. Rapid advances in technology like artificial intelligence and robotics are creating new opportunities in defence and security, as well as new challenges. DIANA will enable the best and brightest on both sides of the Atlantic to advance innovation so we can meet those challenges — and stay one step ahead of our competitors. As a daughter of Nova Scotia, I am excited about the benefits this would bring. With more than 300 entrepreneurial science and technology start-ups, Canadian Forces Base Halifax, and as the home of Defence Research and Development Canada, and seven universities, Halifax Regional Municipality is a natural host for DIANA. If there is anything these past few years have taught us, it is that the gains of liberal democracy can never be taken for granted. It is incumbent upon us all to ensure that future generations inherit a world governed by democracy, freedom and the rule of law. That is exactly the kind of role for which Canada is known. As new threats and pressures challenge our way of life, it is exactly the kind of leadership that we will continue to offer the world.