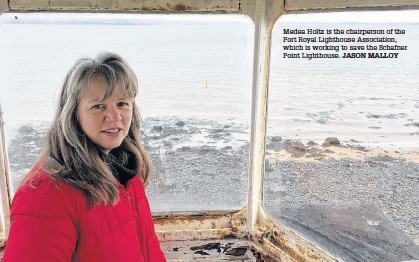 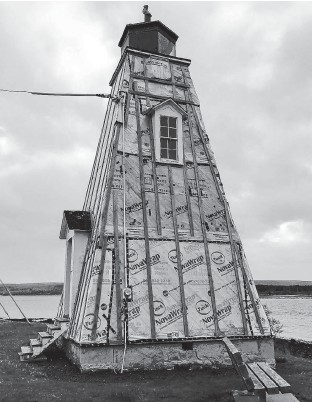 jason.malloy @saltwire.com @JasonMa47772994 When Medea and Allan Holtz were house hunting across Nova Scotia in 2016, one area kept attracting them. A beacon guided them down Granville Road to Port Royal. “One of the things that kept us coming down this road looking at houses was, ‘Good lord, there’s a lighthouse right on the road,’” Allan said. They purchased a property in the community and drove or walked by the historic Schafner Point Lighthouse daily for the past few years. But the 1885 structure needed some repairs. The Annapolis Heritage Society, which took over ownership of the lighthouse from Fisheries and Oceans Canada (DFO) in 2015, started some reshingling work in 2019. The Holtz family and others in the community were excited to see the scaffolding go up and work begin. But things soon stopped. “When the shingles came off, they found out that the wood underneath was furry with fungus, mold and all kinds of problems,” Medea explained. “The corner timbers, which are the massive supports, were rotting also.” In 2019, the society was given an estimate of $89,000 plus HST to do the needed work. “It looked like what the lighthouse needed was much, much more than the Annapolis Heritage Society could afford to do,” said Amery Boyer, the society’s executive director. It left the structure’s future up in the air. “We couldn’t go by Schafner Point every day and see the lighthouse wrapped in Typar and silently rotting away. We had to act,” Medea said. The Schafner Point Lighthouse, also known as the Port Royal Lighthouse, is one of six lighthouses in Annapolis County, and the oldest surviving lighthouse on the Annapolis Basin. “This is an unusual lighthouse from some because it is actually still a working light,” Medea said. “So, there’s a light up there in the top and the DFO shares a key with us because they always need access.” Medea and Allan didn’t have a long connection with the lighthouse but wanted to see it preserved for future generations. “Lighthouses are like a magnet. They’re a draw. They’re romantic. They’re beautiful,” Medea said. “There’s a lot of things we could be spending time and money on, but this is here, we are here, and it just seemed to be calling to us to save it. “If we didn’t do this, we would have a light pole with a light on it.” She said the lighthouse draws people to the community every day. “You want to stop by the sea,” she said. “It’s inspiring and I think we need that.” Concerned community members reached out to the society last fall to see what could be done. Mary Ritchie began rallying support through social media and after a series of meetings and tossing around various options, forming a non-profit association to take over ownership of the lighthouse was deemed the best solution. The Port Royal Lighthouse Association was incorporated in August, and it received the keys from the society on Oct. 21. But that’s just the start of the work. “There is no maintaining,” Allan said. “If we don’t do something it is literally going to fall down.” The community is pulling together and trying to do whatever work it can do in house to keep the restoration bill manageable. Local residents Richard Morrison and Chad Cronin offered to donate timber to be milled in the Morrison mill in nearby Karsdale for the project. “We’re going to try to get (the bill) down as much as we can,” Allan said.” One way or another, we’re going to get (the project) done.” The association is in the process of collecting quotes and recently had the structure re-wrapped to protect it from the elements this winter. They would like to start construction in the spring or summer. The association will be exploring grants and other ways of securing the required funds. It has received some private donations and is exploring a number of fundraising ideas. Medea said the society has talked about hosting various events there in the future and grow the existing synergy formed by having the Parks Canada Habitation and Lower Granville Community Hall nearby. One event is already lined up. An open light day is being hosted Saturday, Nov. 26, from 10 a.m. to 2 p.m. where the lower level of the building will be open to visitors. Allan said the community is excited for the event. “Even people who have lived here all their lives, on this road, have never seen inside the lighthouse.” Boyer said having the association taking over ownership of the lighthouse was the best-possible solution and reinforces what she knows about the region. “What’s impressed me about this place is its resilience (and) the fact that people care about these buildings in their community,” she said. “It’s a wonderful thing that we have (here) – heritage.” She said the society is really appreciative of the association for taking on the project to save the lighthouse. “It’s a bit daunting but we’re inspired by the response so far,” Medea said. “The committee, we’re all 100 per cent committed to making this happen. We’re going to make this happen.”