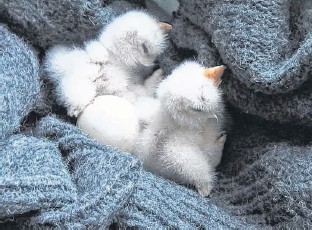 Almost a year ago, two tiny barred owl chicks and an unhatched egg were rescued from a tree that had just been felled during forestry work. Fortunately, someone made the effort to have the owlets transported to Hope For Wildlife, where they were successfully raised. As we head into yet another nesting season, and as both overwintering and incoming migratory birds take up residence to produce the next generation of offspring, this scene will be repeated again and again as a direct result of forestry operations. Some, like tiny owlets, will die as they fall out of, or are crushed in, nests destroyed during tree felling and chipping operations. Others will die due to the disappearance of the specific type of forest needed for the parent birds to successfully build wellconcealed nests and find an adequate supply of food for their young. Many species of birds exhibit a high degree of “nest-site fidelity” — returning annually to the same grove of trees to build nests, forage for food, and seek shelter from predators. Who among us has not seen evidence of birds returning to nest in the very same spot, year after year? Now imagine the stress and disorientation to incoming migratory birds, having just completed flights of hundreds to thousands of kilometres, only to find their familiar grove of forest chopped down and reduced to a wasteland of slash and muddy ruts. In the past, I and others have been told by those who should know better, that forestry operations are good for the birds and that it is cat predation and window collisions that are the real culprits and cause of declines in bird species populations. While both are serious threats, habitat destruction and bird deaths due to largescale forestry operations are right up on top, especially in those species that require mature forest to nest — exactly the same type of forests that are so highly prized for logging. These are the forests that, over the past three decades, have seen the greatest pressure and are now dwindling to almost nothing in many areas of our province. A recently released paper, Forest degradation drives widespread avian habitat and population declines, by Matthew G. Betts and al., (Nature Ecology & Evolution 2022), is based on studies in Acadian type forests right here in the Maritimes. The conclusion is not something to be proud of. Our Acadian mixed forests have become severely degraded and, in many cases, replaced with coniferous softwoods or monoculture conifer plantations which are entirely unsuitable habitat for a good number of forest-dwelling bird species. Accordingly, populations of bird species that depend on Acadian type forests are dropping in sync with forest loss. Those of us who express our concerns about forest and habitat loss to the government have been repeatedly dismissed. We are basically told, “Go away! Everything is fine! We know what we’re doing!” Now we’re being told that the “new way” of doing forestry on public Crown lands will soon be starting, so all will be wonderful. Meanwhile, previously approved parcels on Crown land are being madly chopped and hauled away before the June 1 deadline when the “new way” will kick into effect. In addition, what the government fails to make clear is that it has still not designated the “protected” forests that will be set aside for the survival of wildlife and preservation of biodiversity. In the interim, more forest parcels continue to be approved for cutting — yes, now under the “new way” — but that's not doing much good as far as ensuring that suitable habitat is being preserved for migratory birds and other creatures. So, no, all is not fine! We must remember that certain kinds of mature forests are necessary (not optional!) for the survival of many species of birds, such as those that require hollow cavity trees or certain canopy heights, or particular mosses from which to build nests. Not just “any forest” will do. When will those in power acknowledge this truth? As we wait and wait for the old forests to be protected as vital wildlife habitat, are they, in fact, going down for the count? Under Canada’s Migratory Birds Convention Act, it is illegal to destroy, harass or disturb migratory birds and their nests. Yes. Illegal. However, until things change, that is precisely what is going on in our province every day throughout nesting season. Somewhere, bird nests, eggs and hatchlings are being destroyed. When will we see the kind of change that needs to happen to prevent further death and destruction?