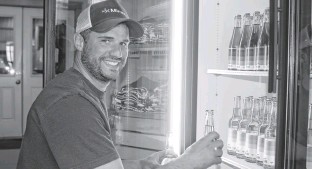 jason.malloy @saltwire.com @JasonMa47772994 A fifth-generation business is branching out as it expands its operation. Spurr Brothers Farms is well-known for its Melvern Square market, where it sells a variety of fruits and vegetables. In July, it began producing hard cider. “As the next generation is coming up, I think there is a lot more diversified interest,” president Lisa Jenereaux said. “One of my brothers, William, was really interested in the hard cider side of things. He decided to pursue that, and we thought it went along really well with the rest of what we were doing.” It allowed them to turn some of their own apples into another product while also bringing a younger demographic to the market. “It really added to our customer base,” Jenereaux said. It’s not the only big development happening within the company. The family bought property along Highway 1 in Wilmot a few years ago to grow more crops. “Over the last few years, and (with) some of the things that have happened in the Annapolis Valley with hurricanes, hail and freezes, we just wanted to diversify our farm a little bit more than it already was and build on things that were quite successful,” Jenereaux explained. “And one of those things was our market that we have here on our farm.” As the family started to see an increase in customers visiting the market, it got to thinking about expanding. “We just thought this would be a great opportunity for us to offer even more to the people looking for local produce.” It considered increasing the footprint at its current location or another spot. “We wanted to create something that was for everybody. Not just a market, but a destination for people to go to,” Jenereaux said. “I think there was a real need on this side of the Valley.” From the initial dream, the family created a business plan. A new farm market taproom with a patio and pavilion is under construction on the family’s property in Wilmot. It is located between the Cavendish plant and Guy’s Frenchys, about six kilometres from the farm. Once the nearly 2,000-square-foot facility is ready, the family will consolidate its operations under one roof in Wilmot. The new location, which is hoped to be ready in early July, will provide more visibility along Highway 1 and has the potential to be expanded. Bruce Prout, who represents District 1 on Annapolis County council, worked for Spurr Brothers Farms as a teenager. His riding includes Melvern Square, but not Wilmot where the new location will be. “It’s a wonderful success story,” he said of the family business. “They’re a hard-working family,” he added, noting he wished them all the best with the new location. “I’m sure they’ll be very successful.” The company received $100,000 in non-repayable funding from the Atlantic Canada Opportunities Agency’s (ACOA) tourism relief fund to make the project a reality. The funding was to help construct an outdoor covered pavilion and a patio, as well as a taproom equipped with heat pumps for year-round comfort to create a hard cider and agri-tourism experience. “On our own, it would be much more difficult for us to be able to do everything that we wanted to do.” Jenereaux said she hopes the new facility will entice people to make a day trip to the region. “We’re not looking to be the next farmers’ market. We are looking to be a destination,” she said. “Hopefully, it will drive more people here and be great for all businesses in our area.” Jenereaux said the family enjoys sharing its story with others and have done tours of its farm for groups like 4-H clubs. “We love sharing what farming is all about and I hope this will be an extension of that,” she said. “I think people are interested in knowing where their food comes from.”