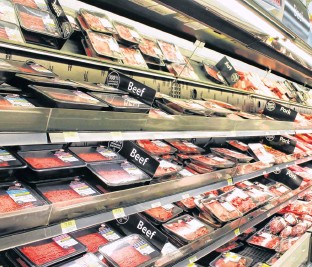 U.S. President Joe Biden recently presented a billiondollar program to lower food inflation by increasing competition in meat packing industry. It was in response to a damning report prepared by White House economic advisors, which suggested the top meat packing plants have increased profit margins by 300 per cent since the beginning of the pandemic. The report did not sit well with Biden. Consolidation in the meat packing industry has been an ongoing issue in many parts of the world. South of the border, four dominant companies – Tyson, JBS, Marfrig and Seaboard – control as much as 85 per cent of the nationwide meat packing business. Biden has openly blamed the big four, as they are called, for skyrocketing prices at the meat counter. While food inflation has been at about 6.4 per cent in the United States during the last few months, meat prices have risen by more than 12 per cent in the last year. Meanwhile, farmers are getting less for their product. Washington plans to tackle the lack of competition by supporting smaller and independent meat packers. Since buying local and food inflation are top-of-mind for Americans, it’s a no-brainer political move for the Biden administration. Americans love their meat, they are among the top meat eaters in the world. Each American will eat almost 109 kilograms of meat a year. Canadians, on the other hand, will eat about 68 kilograms of meat a year. It’s still a lot of meat, but America’s love affair with meat is unique. The concentration of the packing industry in Canada for beef is similar to the United States. Three plants process about 85 per cent of all the beef produced in Canada. For pork, oligopolistic forces are not as significant. We have dominant players like Olymel and Maple Leaf, but we also have other, smaller players too. The poultry situation is also more balanced compared to the U.S. Still, meat prices in Canada have gone up by more than 10 per cent in the last year in many parts of the country, which is more than double the rate of food inflation in general. Many are blaming meat packing companies for gouging consumers. Canadians have not seen a report similar to the one the White House produced a few weeks ago, so we don’t know what the situation looks like here. Regardless, food processing is challenging and for meat packing it’s even tougher. Food safety standards and other regulations have made it close to impossible to start a new federally licensed plant, a facility capable of selling out-of-province or overseas. Regional abattoirs, which can only transact within a province, have less to worry about. Costs of distribution for the packing industry are considerable, especially in Canada, but the biggest cost is labour. It has always been an issue for the sector, but the pandemic has made things much worse. While Cargill, Exceldor and Olymel are now offering better working conditions, higher wages, and benefits to workers, the increased use of robotics is inevitable. It’s happening everywhere including here in Canada. Capitalizing operations will add more financial pressures on meat packers. These pressures are barely understood or even appreciated by most people outside of the industry. Seeing different market dynamics within the supply chain in a time of crisis is not new. When the Mad Cow crisis hit in 2003, beef producers saw their prices plummet by more than 70 per cent while retail prices barely moved. Both beef ranchers and consumers were upset. More than 300 meat packing projects were launched at the time, largely driven by the anger of our beef producers towards meat packers who were profiting from the crisis. In the end, only two federally licensed slaughterhouses actually saw the light of day after a few years of work. It is believed that both facilities have now been closed for years. While there are concerns about meat packing practices in Canada, it’s simply not an easy business. More government intervention, while aiming to change market conditions can only go so far. Most would agree that more regional processing is critical. But the economics of meat processing make it difficult for any company to survive unless volume and capacity are achieved, especially in Canada. And for taxpayers who don’t eat meat and believe the sector should be outlawed, seeing our government providing financial support to the sector may not be welcome news. Still, if meat packers are colluding, in the same way we saw with bread prices a few years ago, some intervention is called for. If the Biden administration wants to change rules, create more competition, and ease the financial burden on American families to score some political points, so be it. Government-induced competition rarely works and Biden’s program is likely not going to be effective. This is more about smoke and mirrors, and President Biden knows it. Sylvain Charlebois is professor in food distribution and policy, and senior director of the AgriFood Analytics Lab at Dalhousie University.