The Annapolis Valley was on Tim Kendrick’s radar as soon as the idea of a professional basketball league in the Maritimes was floated. “When we started this league, one of my goals was to have a team here in the Valley,” the Wolfville native said. It became a reality on Nov. 17 when the Valley Vipers were born. They become the newly formed Eastern Canadian Basketball League’s fourth announced team. The league plans to begin play in March and finish in June. “It’s a thrill,” said Kendrick, the league’s president. “Having grown up here … and having a good pulse of the Valley, I think people are really going to take to this.” The Vipers will play out of the Kings Mutual Century Centre in Berwick. Robert (Bobby) Best manages the facility, which is run by a board of directors. He said having another tenant is “huge” as it helps bring in another source of revenue. He said he thinks the team will do well. “I feel basketball is really big here in the Valley,” he said. “There’s a lot of people (who) play basketball and I think there’s more and more all the time.” Berwick Mayor Don Clarke said it was exciting to see the league coming to town. “I almost dropped off my chair when Bobby called me and told me this was happening,” he said. “It’s great for the Valley. It's obviously an economic boost, and another reason to come, live and stay here.” An announcement was made Nov. 17 at the arena in Berwick with some students from neighbouring Berwick and District School in attendance. “This is your team,” Kendrick told the crowd, noting some of the league’s management team in New York have never been to the Valley. “I certainly brag a lot about where I am from. I certainly told them this is going to be one of the jewels of this league. I said this place is going to be packed every game.” Kendrick said they wanted a new team name that was catchy and the whole region could embrace. “I kind of came up with that one,” he said, noting the logo, designed by Allstar Cresting in Charlottetown, is beautiful and was well-received in the crowd during the official launch. “We feel like we have a bit of a hit.” Kendrick is well-known in the Annapolis Valley. He coached the Horton Griffins boys basketball team for 22 years, including a 73-game win streak from 2006 to 2008. He has been inducted into the school’s sports hall of fame as both an athlete and a coach. Kendrick moved to Charlottetown in 2011 and coached the UPEI Panthers and the Island Storm of the National Basketball League of Canada. Clarke, who taught at Horton High School, knew of Kendrick before the announcement and said his involvement in the league gives it credibility in the community from the start. “Tim is a known quantity and has been successful in the world of basketball.” This won’t be the first time the Maritimes has had professional basketball. The Halifax Windjammers played in the World Basketball League and National Basketball League in the early 1990s, plus the National Basketball League (NBL) of Canada operated in the region for the past decade. The NBL will only operate in Ontario this year, with the Atlantic teams either withdrawing from the league, taking a leave of absence, or not securing a venue to play in. 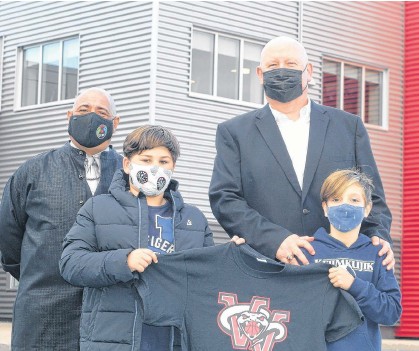