A father-daughter duo appreciates that The Nutcracker is a celebration of holiday traditions, dance and perhaps most importantly, family. Aries MacDonald, 16, who plays the Snow Queen and other roles, has been dancing in Cadance Academy’s production for several years. She said preparing to perform alongside her father, Ward MacDonald, is this year’s epic father-daughter Pas De Deux has been a great experience. They’ve shared the stage in certain scenes in the past, which Aries said was fun, but they have never really danced together. “Other than that, I was in other scenes and he wasn’t, so it was really nice this year to be actually dancing with him for the first time,” Aries said. Ward, who started playing the role of Drosselmeyer six years ago, said the cape was enough to convince him to get on stage. However, preparing to perform in a dancing capacity with his daughter for the first time has been “magical.” He said the experience would be something they would share, keep and definitely remember forever. “For us to dance together, to be a true partner in this, is truly emotional,” Ward said. Ward has a lot of acting experience but is new to the world of dance. Working alongside the dancers over the years, he saw and appreciated how much work, skill and technical ability went into it. Out of respect for this, he asked Cadance artistic director Gaea Jess about leaping from acting to becoming a dancing character in The Nutcracker. The provincial government has mandated municipalities across Nova Scotia to develop accessibility plans, with recommendations being implemented by 2030. The goal is to make communities more accessible and to promote greater inclusion in all aspects of society. Smith said he believes the goal of having municipal accessibility plans implemented by 2030 is realistic. There are supports in place for municipalities and he believes “it can be done.” Smith said it will take political will and the will of society, in general, to get there. People have to recognize there is a significant financial cost involved. The five key areas of focus for municipal accessibility plans include equitable access to goods and services; information and communication, the built environment, employment and transportation. “When you include all of those things, it’s a massive undertaking, but we’ve learned so much even by talking with each other and talking with the community,” Smith said. ASSESSMENTS UNDERWAY Annapolis County community outreach and tourism manager Debra Ryan said her role is to co-ordinate the development of the county’s accessibility plan, working in conjunction with the eightmember accessibility advisory committee appointed by the municipal council in June. “It’s mandated that over 50 per cent of members must have some form of disability so that the assessments and the dialogue is real and it reflects people who have gone through it and have lived it,” Ryan said. They are currently assessing parks, trails and other public facilities throughout the municipality to understand where they currently stand and where they need to go. Having been involved in recreation for 30 years, Ryan said she has witnessed barriers to participation, such as people not being able to access buildings or facilities. Although they have been working for years to help improve accessibility in the community, there is a lot involved and it can’t happen overnight. Ryan said she believes the planning process has great value. It’s been educational, informative and everyone is learning together. They’ve already held public consultations through three meetings, several focus groups and an online survey. LENS OF ‘LIVED EXPERIENCES’ Coun. Lexie Misner serves on the Joint Accessibility Advisory Committee in Kings County, which provides advice to Kings County council, the village commissions within Kings County and Kings Transit as they work toward developing an accessibility plan. Misner said the committee wants to assess accessibility through a lens of lived experiences. In other words, “when you know better, you do better.” “I think that we are at the cusp of a really great shift in terms of societal inclusion in a lot of ways,” Misner said. “We’re at a point where I think that we can really hone in on an opportunity to include people from their point of view instead of what we perceive as their necessity.” They are working with a consulting firm, Intelligent Futures, to gather public input and feedback on what works, what doesn’t and how things can be improved. Outreach initiatives have included stakeholder interviews, breakout community sessions and an online survey. The second phase runs until late January, giving the project team the opportunity to check back with the community to ensure their insights have been captured effectively. The plan is due to be completed by April. “There have been some really great points brought up, there’s been a lot of really great communication and I think that it’s been a really great learning opportunity for some people who do sit on the committee who don’t have those lived experiences,” Misner said. AREAS FOR IMPROVEMENT With a background as an educational assistant and having worked in early childhood development for 15 years, considering accessibility is nothing new for Misner. She said the human services field, special education and accessibility is “kind of my passion.” Misner said she was very excited to be asked to serve on the committee. She recognizes that there are many opportunities to address service gaps and to “create a better sense of belonging” for people across Kings County and the Annapolis Valley who face barriers to accessibility. She said it’s also been an eye-opener in identifying areas within the municipality that would often be overlooked as having an accessibility issue. Misner uses the example of an accessible swing for children in wheelchairs in a playground. If the pathway leading to the swing is uneven, covered in pea gravel and has a ledge, children may not be able to get to the swing, which defeats the purpose. 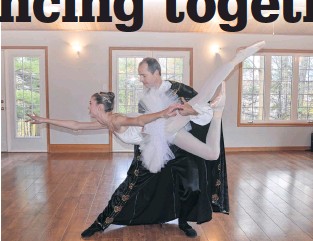